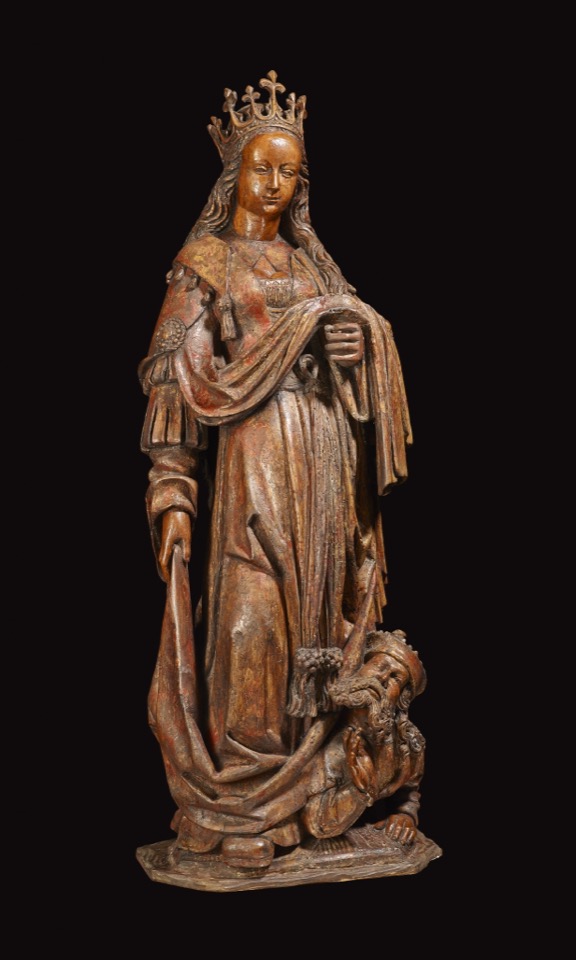 The Holy Virgin St Catherine is shown as a young woman with long flowing hair. She tramples the figure of her persecutor, the Roman Emperor Maximian. Van Steffeswert is the best-documented late Gothic sculptor of the Netherlands. We know about his family in Maastricht, his commissions and lawsuits, and his religious beliefs as he lived through the Reformation.

Statuette of St Catherine; wood; once painted; represented as young woman with long hair and wearing royal crown and heavy mantle fastened by brooch on either side; holds sword before her and tramples on the emperor, Maximian, who appears at her left side; original hand and sword broken and separate; box of fragments, and paper removed from centre; stand.

Commentary: From Tait 1981: '....the St. Catherine....was carved in the vicinity of Maastricht in the early sixteenth century, has more character [than the St. George model, WB.259] and, in particular, the expressive treatment of the prostrate Emperor Maximian is an example of the high artistic level that was being achieved in certain workshops in the Meuse region (near Aachen) at this period. Indeed, the Waddesdon St. Catherine [can be] confidently attributed to the workshop of the talented sculptor Jan van Steffeswert, who was active in and around Maastricht from 1501 to 1524 and whose figure of St Barbara at Neeroeteren is closely similar in many respects. Few of his works have survived, and in England the only other sculpture from the hand of Jan van Steffeswert known to exist is the Virgin of the Crescent in St. Mary's College, Oscott.'

There was a very similar Virgin Mary figure (with St Anne and infant Christ) by this artist on sale with Bernhard Descheemaeker, Antwerp, September 2006. This figure has some of its original polychromy.

Steffeswert signed and dated a Saint Anna group in Pey Echt; from this derives a statue of St. Anna and the Virgin in Sint-Truiden which can be closely compared with WB.260 and the figure group on sale in Antwerp, above in 2006.

Van Steffeswert is the best-documented late Gothic sculptor of the Netherlands, with 14 signed and 8 dated works. He is also well-documented in terms of his family in Maastricht, his commissions and lawsuits, and his religious beliefs. His name was discovered in Maastricht documents in 1990; a signed Mary Magdalene was acquired by the Bonnefanten Museum in 2003. He apparently leaned towards Lutheranism at the end of his life and his son and daughter-in-law became Anabaptists.