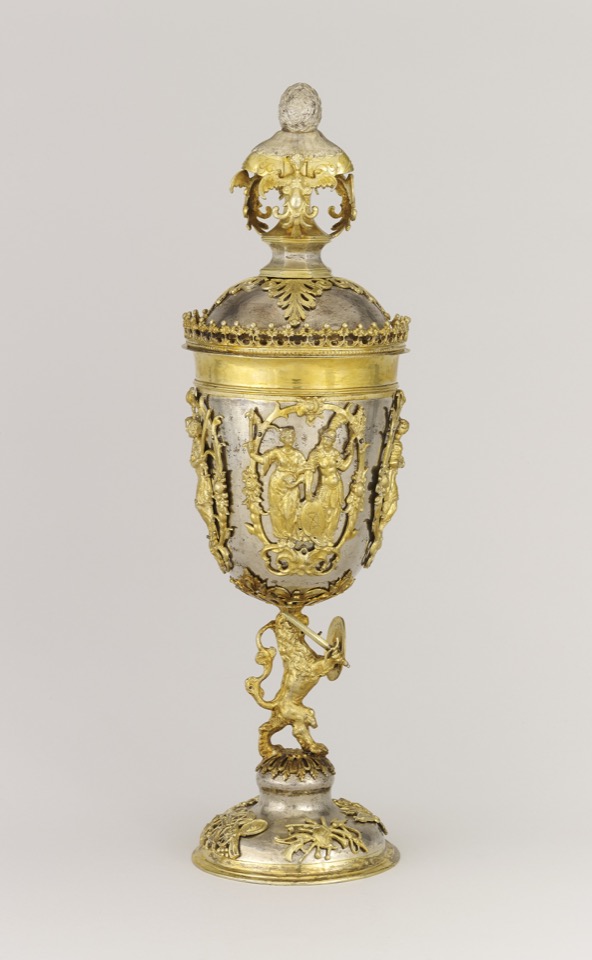 Made to commemorate Gustavus Adolphus, who was King of Sweden between 1611–32. As a military leader in the Thirty Years’ War he made his country into a major European power. The ‘Lion of the North’ was killed at the battle of Lützen in 1632. An inscription inside the cover celebrates ‘the most conquering of Heroes’ and his bust appears on the lid.

Commentary: In Rosenberg II, 1923 (R3 2031, pp. 82-4), there is a list of five examples of this Gustavus Adolphus cup by Paul Birckenholtz. Of the five, the first is the unmarked but well-documented cup of 1634 that was acquired in Frankfurt by the Landgrave Wilhelm V of Hesse for his Kunstkammer and has since remained in Kassel, where it is exhibited in the Staatliche Kunstsammlungen. Inside the cover it has the identical inscription on a silver tablet (see Eva Link, ‘Die Landgräfliche Kunstkammer, Kassel’, 1974, p. 15 with illus.). The second is the unmarked but documented example in the ducal collection at Brunswick, which was inventoried as the work of Paul Birckenholtz in Frankfurt and was subsequently exhibited at the Brunswick Museum in 1906 (no. 122). The third is the Waddesdon Bequest example; and a fourth example was given to the Victoria and Albert Museum in 1898 by Colonel F. R. Waldo-Sibthorpe (see C. C. Oman, ‘German Domestic Silver, 1618-1700’, HMSO Small Picture Book No. 64, 1967, figs 6-8). The fifth example was exhibited in Dresden in 1906, but its present location is not known; however, an example, with the inscription, was stated in 1980 to be in the Westfälischen Landesmuseum, Münster (see ‘Wittelsbach und Bayern’ 1980, 11/2, p. 437, no. 702, illus. on p. 438).

The Imperial 'free city' of Frankfurt-am-Main had decided to join the Protestant cause, and so opened its gates to the Protestant army of Gustavus Adolphus in November 1631, enabling the King to continue his march into the Electorate of Mainz, where he spent the winter months of 1631-2. His Court at Mainz became the focal point of European diplomacy, but no peaceful solution could be found and after a further year of military operations the Battle of Lützen was fought. It began on 16 November 1632 and by noon the King had been separated from his army in the fog and was slain by Wallenstein's forces. The death of this most gifted ruler at the height of his fame, and at only thirty-eight years of age, struck the world with awe. It is hardly surprising, therefore, that the leader of the Protestant cause in the Thirty Years' War should have become a hero and been commemorated in innumerable ways, not least by the Frankfurt goldsmith Paul Birckenholtz, whose beautiful silver cups have a restrained dignity that was no doubt appreciated by their noble owners whose friendship and support the King had valued.

Paul Birckenholtz's technique of encasing a plain silver covered standing-cup with a cage-work of gilded silver was both effective and economical, since, on the one hand, the openwork is seen silhouetted against the white silver background and, on the other hand, it was cast and could, therefore, be repeated for each patron who wished to have a piece of commemorative plate as an expression of loyalty. His use of openwork ovals enclosing standing emblematic figures may have been inspired by the work of Augsburg goldsmiths such as Matthäus Wallbaum, who employed the technique so effectively against a background of ebony or dark wood. No more sensational example can be quoted than the truly monumental Pommersche Kunstschrank (the Pomeranian cabinet of art and curiosities), which was transported in 1617 from the workshops of Augsburg craftsmen to the Court of Philipp II of Pomerania; it remained in Berlin until its destruction in 1944 (see Tjark Hausmann in ‘Die Brandenburgisch-Preussische Kunstkammer’, Berlin, 1981, pp. 65-9, nos 1-3, with illus.; also H. Seling, ‘Die Kunst de Augsburger Goldschmiede 1529-1868’ 3 vols., Munich, 1980, p. 256, pls 225-8, where the four openwork ovals enclosing the tall elegant Mannerist figures of Geometry, Astronomy, Architecture and Commerce (holding the caduceus of Mercury) are each reproduced separately). Wallbaum's rare and masterly application of this technique to an item of silver plate, so that his emblematic figural openwork again encases the body of the object is, however, preserved on a well-documented chalice of 1611 in the Schlosskirche at Zeil, near Leutkirch in Upper Schwabia (J. M. Fritz, Ein Messkelch von Matthäus Wallbaum aus dem Jahre 1611, in ‘Studien zum europäischen Kunsthandwerk’, Munich, 1983, pp. 155-63, figs 1-2, 10-16). Although this technique was evidently not very popular with German goldsmiths in the late sixteenth or early seventeenth centuries, two other Augsburg makers, Raimund Laminit (see cat. no. 24, WB.97) and Christoph III Epfenhauser, had both used it c. 1590 when making large altar-vases filled with silver flowers (now preserved in the Dortmund Museum and the Vienna Kunsthistorisches Museum, respectively - see Seling 1980, p. 234, pls 24-5). Furthermore, an early seventeenth-century example of this cage-work of gilded silver can be seen in the Munich Residenz in the private chapel of the Duke of Bavaria, Maximilian I (reigned 1597-1651, made Elector in 1623), where two spherical baldacchino mounts (H. 33.7 cm) are encased with four half-length putti, festoons and the monogram ME (Maximilian-Elizabeth) within a laurel wreath and beneath the ducal crown. They bear the Augsburg punch-mark, and the maker has been recently identified as Georg Jungmair (see Seling 1980, p. 236, pl. 32; also ‘Wittelsbach und Bayern’ 1980, II/2, p. 246, no. 365, illus. on p. 247).

Paul Birckenholtz may, therefore, have acquired his knowledge of this fashion and technique from the Augsburg workshops of these three makers or some of their contemporaries, but he seems to have ingeniously adapted it to suit his own very individual style. This can be studied on the famous Marburg University Jubilee Cup, three examples of which are preserved in German princely collections - at Kassel, at the Munich Residenz, and since 1705 in Berlin in the collection of the kings of Prussia (see H. Brunner, ‘Schatzkammer der Residenz München’, 3rd edn of the Catalogue, Munich, 1970, no. 604; also Franz-Adrian Dreier in ‘Die Brandenburgisch-Preussische Kunstkammer’, Berlin, 1981, p. 126, no. 48). Many of the decorative features of this Marburg cup are very similar to those used on the Gustavus Adolphus cup, such as some of the military trophies, the cresting around the rim and the central capping of the domed cover. Perhaps the most striking repetition is the use of the same heraldic lion but without a sword and buckler; also, instead of using it in the stem (as a caryatid figure) Paul Birckenholtz has used it on the cover as a finial. Once again, because the Marburg cup was intended to be sold to a number of distinguished patrons, Paul Birckenholtz was planning to achieve substantial economies by casting the many gilded decorative elements that were to be applied in the four zones around the bowl of the cup, as well as those on the cover and foot. These 'limited editions' for sale to a very restricted and privileged clientele are an extraordinary phenomenon - an unexpected contribution by a goldsmith of early seventeenth-century Frankfurt to the history of German silver plate.

The symbolism of a lion with a sword and buckler on this commemorative cup was singularly appropriate, and can be compared with the very similar lion holding the halberd engraved with the arms of Charles IX, Vasa of Sweden (reigned 1604-11), the father of Gustavus Adolphus; today, it is known only from a drawing by the Hamburg goldsmith Jakob Mores, who intended the lion to serve as a ewer and the halberd as a spout (Kunstbibliothek, Berlin - see J. F. Hayward, ‘Virtuoso Goldsmiths and the Triumphs of Mannerism 1540-1620’, Sotheby Parke Bernet Publications, London, 1976, p. 355, pl. 186).

The miniature bust of the King (on the cover) provides a good likeness and may be compared with the famous bronze portrait bust (H. 67.8 cm) signed GEORG : PETEL : AD VIVI SGVLP : 1632 (in the National Museum, Stockholm), which this talented sculptor, working in Augsburg, completed two years before his own death, and to the superior earlier (?) version in the Swedish Royal Collection (inv. 64 - see ‘Christian IV and Europe’, The 19th Art Exhibition of the Council of Europe, Copehagen, 1988, no. 1075, pp. 332-3, illus. with bibliography). Similarly, this miniature bust portrait bears a close resemblance to Georg Sweigger's honestone model for the tomb effigy; the model is fully signed by this Nuremberg artist and dated 12 December 1633. It measures only 22.5 x 10 cm, and since 1931 has been preserved in the Museum für Kunst und Gewerbe, Hamburg (see exhibition catalogue ‘Christina, Queen of Sweden and her epoch’, The 11th Council of Europe Art Exhibition, Stockholm, 1966, p. 74, no. 17).