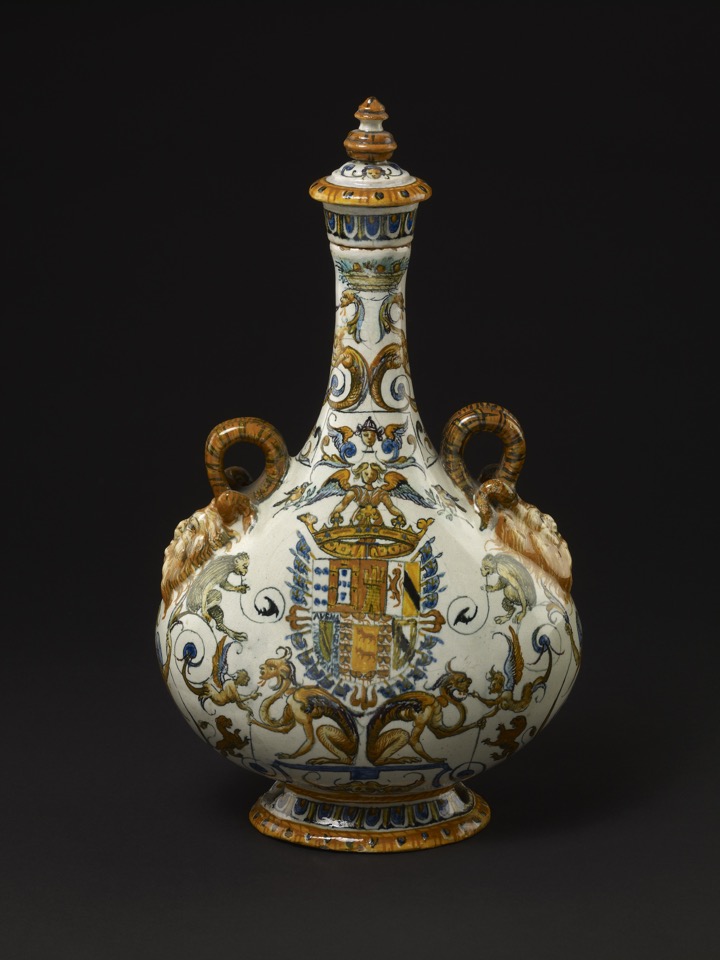 The flask is part of a large ceramic service, each piece of which is painted with the arms of Fernando Ruiz de Castro, 6th Count of Lemos, and of his wife. In 1599 they arrived in Naples, which was then a Spanish dominion, as the new Viceroys. Perhaps the set was a diplomatic gift from the Dukes of Urbino to welcome the couple.

Pilgrim flask with two scrolling handles terminating in moulded masks. The everted foot has a rectangular slot cut into each side. Earthenware covered with a presumed tin-glaze. Painted with grotesques incorporating monkeys, lions rampant, birds, winged heads and monsters. On either side an identical coat of arms, surmounted by a coronet, held by a winged figure, flanked by twigs supporting birds. The shield of arms are for a count of Lemos.

Commentary: Text from Thornton & Wilson 2009 - 'This flask was apparently united with WB.64.a when they were both acquired for the Gavet collection. In the catalogues of the Waddesdon Bequest they were regarded as a pair. They are similar in form and decoration and were in all probability made in the Patanazzi workshop at around the same time. Some details of the grotesque decoration are reminiscent of the favourite source material in the Fontana and Patanazzi workshops, the "Petites Grotesques" of Jacques Androuet Ducerceau. The flask belonged to a service of which the following three other pieces are known to us: a pilgrim flask with spirals in relief in the St Louis Art Museum; a salt in Braunschweig; and a flask with an overarching handle and "istoriato"-painted with marine subjects, the property of the Fondation Bemberg, Toulouse. The arms are those of one of the grandees of Spain, Ferdnando Ruiz de Castro Andrade y Portugal, 6th Count of Lemos, 3rd marquis of Sarria, incorporating those of his wife, Doña Catalina de Zuñiga y Sandoval. He was born in 1548, married in 1574, was admitted to the Order of Calatrava in 1575, succeeded to the titles on his father's death in 1590, became Viceroy of Naples in 1599, and died there in 1601, after which his wife returned to Spain. The presence of a marquess's coronet on the BM flask probably indicates that he had already succeeded to his father's titles. These arms could refer to the marquess, to his wife, or to the two jointly.

Previous publications have tended to suggest a date around 1580 for the flask, contemporary with what was thought to be the marriage of Alfonso d'Este and Margherita Gonzaga in 1579. As discussed in the [entry for WB.64.a], this dating for the ARDET AETERNUM set is no longer convincing.

Franco Negroni has published some of the documentation from the Urbino archives about a series of commissions placed with the workshop of Francesco Patanazzi. These important documents deserve systematic transcription and detailed study. They show that in 1593 Isabella Della Rovere, Princess of Bisignano, the daughter of Guidobaldo II, Duke of Urbino, and sister of the reigning duke Francesco Maria II, ordered a service of maiolica from Francesco Patanazzi, as a gift to the wife of the Spanish Viceroy of Naples, Juan de Zuñiga, Count of Miranda; three plates survive with the arms of Zuñiga, which may have formed part of his service. Some other pottery was bought from Patanazzi by Cesare d'Avalos to be given to the wife of one of the viceroys at an unspecified date. In 1599, Isabella commissioned, through the agency of Giovanni Bernardino Albani of Urbino, a further set "di vasi historiati et a grottesco" and with "l'arme della Viceregente che ha da aver dipinti sopra i vast et piatti di detta credenza", from Patanazzi, to be given to the wife of the new Viceroy; this was to be on the pattern of the 1593 set but enlarged so as to contain 377 pieces, including a turtle tureen ("tartaruca") and two stacking childbirth sets ("scudelle da impagliata con il loro pezzi"). The Princess specified that it was "not only to have the historie varied but was to be increased in grace and beauty as far as possible", and the service was to be delievered in March 1600. In July 1599, the Count of Lemos had arrived to take up the post of Viceroy and it was his wife Catalina for whom the service was intended. Among the items in the 1593 list which served as the basis for the 1599 commission were "3 fiaschi di bella forma grottesche et historiate", which were presumably pilgrim flasks of this type, although it would have been odd to describe the present flask as "historiata".

It seems overwhelmingly likely that the four pieces known with the arms of the Count and his wife's arms formed part of this large and important commission. The dating 1599-1600 is later than that previously suggested for the service, and the style of the grotesques is not much different from that of the jars dated 1580, which bear the signature of Antonio Patanazzi. This suggests that the painting style of Patanazzi-workshop grotesques did not develop greatly through the 1580s and 1590s, so that close dating on stylistic criteria alone is not possible.

This later dating is supported by the similarity of style to an armorial service made in 1597 or later, for Hans Imhoff of Nuremberg and his second wife, Anna Schmidtmayer.'