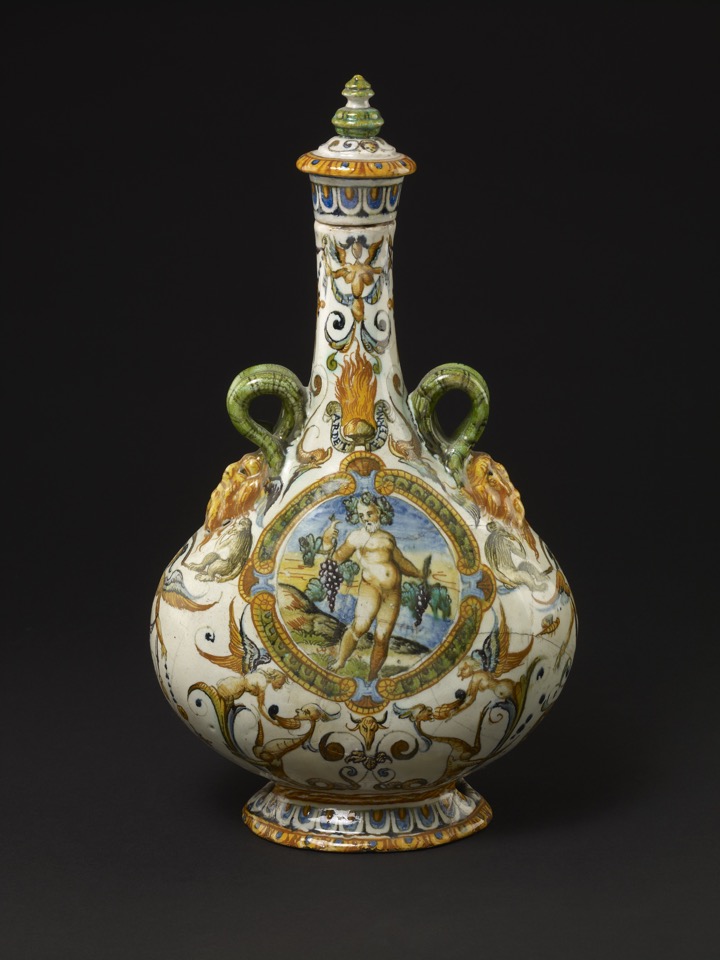 Part of a very ambitious and elaborate set of ceramic dining wares. Each piece in the set has the device and motto of Alfonso II d’Este, Duke of Ferrara. The device shows a piece of asbestos in flames, with the motto ‘it burns forever’, as an emblem of undying love. The roundel shows a man warming his feet in front of the fire, evoking Winter.

Pilgrim flask with two scrolling handles terminating in masks; inscribed; the foot has a slot cut in each side; inscribed; the cap has a screw fitting; inscribed; earthenware covered with a presumed tin-glaze; inscribed; painted with grotesques, on each side is a medallion, one containing an old man warming his feet at a brazier (Winter) and on the other a nude male (Bacchus) holding two bunches of grapes (Autumn); inscribed; above each of these an impresa with burning asbestos and "ARDET AETERNUM"; inscribed.

Commentary: From Thornton & Wilson 2009 - 'The figures represent autumn and winter. A set of dishes from the same workshop in the Castello Sforzesco, Milan, have the four seasons, with a figure of autumn from the same model as the figure on this flask. Some of the grotesques seem to be derived from the "Petites Grotesques" of Jacques Androuet Ducerceau but less meticulously followed than in some earlier cases. This flask is from one of the most ambitious and elaborate maiolica services of the late 16th century. At least 43 pieces bearing the device and motto, decorated with white-ground grotesques and "istoriato" scenes, are recorded [for a list see Thornton & Wilson 2009, no. 240].

There is no evidence as to the original size of the service, but the exceptional variety of forms surviving suggests that it may have been very extensive. Some contemporary aristocratic maiolica services were enormous; one made in Faenza in 1590 for Count Camillo Gonzaga, for instance, consisted of 601 pieces, the varied shapes of which are described in the contract documents. One supplied by the Patanazzi workshop in the 1590s consisted of over 300 pieces of some 40 different named forms. In the ARDET AETERNUM service, there seem likely to have been at least two of each of the types of pilgrim flask; and Autumn and Winter on the BM flask may have been paired with representations of Spring and Summer on a companion one.

The "impresa" represents a piece of burning "asbestos". This was a material, according to Pliny the Elder in his "Natural History", which came from the mountains of Arcadia; medieval interpretations suggested that, once set fire to, it could not be extinguished, which is the point of ARDET AETERNUM. According to Camillo Camillo's "Imprese illustri di diversi" of 1586, the emblem and motto were adopted by a young Sienese nobleman, Curtio Borghesi, as an indication of "la perseveranza dell'animo suo". It was an evidently suitable emblem for undying love, and this is clearly its meaning when used as the reverse of a double-portrait medal (illustrated) of Alfonso II d'Este (1533-97), Duke of Ferrara, and the young Margherita Gonzaga, whom he married as his third wife in 1579.

Following the argument of Boschini, generations of scholars assigned the date 1579 to the service, and Alfonso Lazzari in his 1913 book, "Le ultime tre duchesse di Ferrara" wrote a vivid but entirely invented description of the use of the service at the wedding. However, no contemporary documentation has been found of this, and recent scholarship suggests a dating of the medal to the 1590s, some years after the marriage. The discovery that the large plate from the series in Milan is based on an engraving after Marten De Vos which is likely to be from the mid-1580s proves that at least part of the service must have been made some years after 1579. The "impresa" could have been used by the couple up to Alfonso's death in 1597, and by Margherita even afterwards: the sentiment of the "impresa" would not have been inappropriate to a widow.

Reasonably enough, some scholars since Boschini have supposed that the service was made at Ferrara. However, there is no documentary evidence for production of artistic maiolica in the circle of the Este court at Ferrara in the closing years of the 16th century. Furthermore, the style and technique are so close to works marked as made in the workshop of the Patanazzi family and that is almost certainly the correct attribution. The close similarities to the service made for the Count of Lemos, which....may have been made in the Patanazzi workshop in 1599, suggest that this service was made some years after 1579, perhaps from the last decade of the century.'