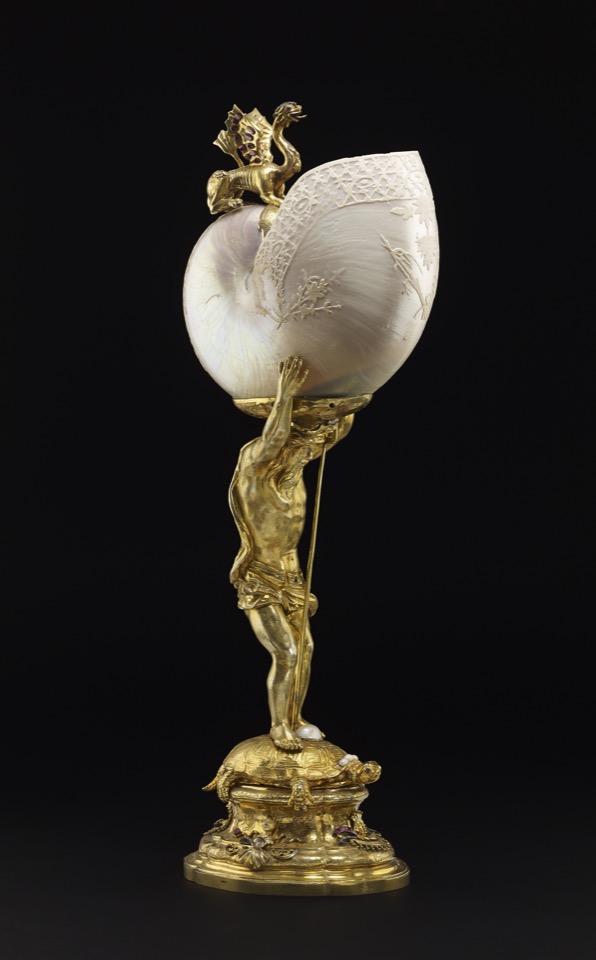 An exotic shell has been carved and mounted on a figure of Neptune for a collector.

Marks: On the narrow vertical foot-rim at the rear of the rococo pedestal base three marks are punched, alongside an assay sample 'wriggle-mark':

(i) Assay mark for Dresden (R31669); the crowned shield bearing the crossed swords device, a 'D' below the pommels and a '12' above the blades, has been struck on its side for lack of room on the foot-rim.

(iii) Unidentified maker's mark in the form of an illegible monogram, perhaps composed of three cursive letters, within a plain oval punch (R3 I 787).

Commentary: In Schestag 1866 the marks are neither mentioned nor were they correctly interpreted, because this ‘nautiluspokal’ is described as ‘17 Jahrh.’ without any reference to Dresden. In Rosenberg 1923, this standing-cup was listed along with five other pieces of silver-gilt plate known to bear the same maker's mark. All five were still surviving in Saxony at that time, four in Church possession and one - a mustard pot from a large table centrepiece - in the Dresden Silberkammer (see O'Byrn, ‘Die Hofsilberkammer Dresden’, 1880, p. 142).

Despite the fact that the Dresden assay mark on the foot of this standing-cup is of the particular form in use throughout the middle of the eighteenth century, the date-letter Q was tentatively published in Rosenberg 1923 as standing “for 1717?”; this was repeated in Dalton 1927. Such an early dating would conflict with the rococo style of much of the ornamentation on this piece, and the problems thus created were resolved in Dalton 1927 by stating that “this piece is of several dates”. In fact, this appears not to be the case.

The second cycle of Dresden date-letters gives a Q (incuse) for the year 1741; consequently there would no longer be any conflict with the Dresden goldsmith's use of these restrained forms of rococo ornament at that date. The form of the Q date-letter punch (R3I702) is identical to that found on this standing-cup, and the most probable reason for the Q of the earlier cycle (1717) being preferred in Rosenberg 1923 was the presence of an inscription of 1719 on the silver-gilt chalice in the church at Grimma, which also bears the same maker's mark (see ‘Bau- und Kunstdenkmäler des Königreichs Sachsen’, Gurlitt, Grimma, 1897, p. 104). However, it is not impossible for this goldsmith to have made both the Grimma chalice of c. 1719 and the Waddesdon Bequest nautilus cup in 1741, since a working career of some twenty-five years or more was not unusual in the eighteenth century. Furthermore, two of the other pieces listed in Rosenberg 1923 have the date-letters M and N respectively, which could also belong to the second cycle and so date from 1737 and 1738 respectively. Consequently, on this Neptune nautilus cup, those areas with engraved decoration - the pedestal foot, the calyx and the strap-mount supporting the dragon finial - can all be accepted as dating from 1741.

There remains the question first posed in Read 1902, but more precisely formulated in Dalton 1927, that “the figure of Neptune may be a hundred years older”. No evidence was cited to support this claim and, even with the various studies of seventeenth-century small-scale sculpture published in recent years following upon H. R. Weihrauch, Italienische Bronzen als Vorbilder deutscher Goldsmiedekunst, ‘Festschrift Theodor Müller: Studien zur Geschichte der Europaischer Plastik’, Munich, 1965, no further evidence has emerged. Indeed, the figure of Neptune lacks the strong baroque characteristics and merits that would distinguish it, even if it had been merely copied - let alone created - by a German goldsmith in the seventeenth century. As a piece of sculpture, the figure, though pleasing from one view, is weak and ill-conceived; it is therefore more likely to be the creation of a competent, but unremarkable, goldsmith in Dresden around 1740. Indeed, it may be compared with an equally feeble and rather sweetly modelled Neptune caryatid figure by the Basle goldsmith, Hans Jakob II Sandreuter (master in 1711), which also supports a nautilus shell (see Ulrich Barth, in ‘Schätze de Basler Goldschmiedekunst 1400-1989; 700 Jahre E.E. Zunft zu Hausegenossen’, exh. cat., Historisches Museum, Basle, 1989, vol. I, p. 38, no. 10, fig. 27). This privately owned silver-gilt nautilus cup (H. 35 cm) has a stem composed entirely of the bearded, almost nude, figure of Neptune standing precariously on the head of a dolphin, which in turn is balancing on the rounded top of a high pedestal foot. This Basle nautilus-shell cup is dated “um 1720/30” in the exhibition catalogue.

Therefore, although there are several signs of alteration - the empty holes between the heels of Neptune, on the drapery (below his navel) and on the calyx - the Waddesdon Bequest cup (as it is now constituted) may be largely original and date from 1741. Both the gem-set dragon finial and the gem-set pedestal base are executed in the Dresden taste of the first half of the eighteenth century, and the stem is an undistinguished but perfectly acceptable solution that would have been in accord with the German fashion of that time. Even on the nautilus shell the oriental style of the floral reliefs and the trellis pattern was in keeping with much of the painted and relief decoration on the Meissen porcelain of the 1730s and 40s.

This Dresden rococo nautilus cup is, therefore, a rare and interesting demonstration of the long-lasting appeal of this category of Kunstkammer object and may be compared with the more exuberant, but not unrelated, solution that the Dresden Court jeweller, Johann Köhler, created in 1724 when he provided new silver-gilt mounts for a carved nautilus shell (with an openwork helm) that was being prepared for the newly created Grünes Gewölbe (inv. no. in, 185 - see Joachim Menzhausen, ‘Das Grünes Gewölbe’, Leipzig, 1968, pp. 104-5, pl. 122; also J.L. Sponsel, ‘Das Grüne Gewölbe zu Dresden’, vol. I, Leipzig, 1925, p. 172, pl. 49). It is also significant that when this shell cup of 1741 was acquired some time before 1866 as a prestigious work of the seventeenth century its true nature was misunderstood and it was mistaken for a baroque version. Today, its historical interest as a document of Dresden taste in 174 can be fully appreciated.