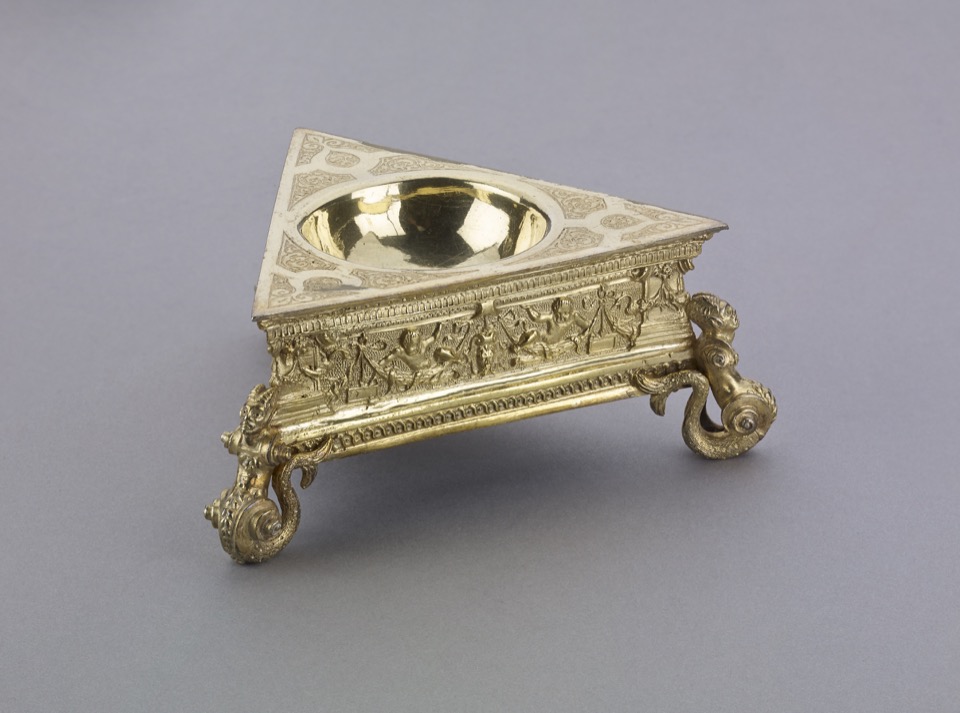 Salt-cellar; silver-gilt; chased; triangular; frieze each side. flanked by pilasters, cupids and festoons; each foot is terminal figure with double serpentine tails; panels of etched scroll ornament on top.

Commentary: In Read 1902, the origin of this salt-cellar was most cautiously expressed, using a highly unusual formula of words: “Style of South German work of about 1550”. In the context of Read's 264 other catalogue entries, this choice of words must be regarded as significant and, probably, as indicative of Read's uncertainty about the genuineness of the object.

In Dalton 1927, however, the mid-sixteenth-century attribution is unqualified; it reads: “South German, about 1550”. Furthermore, it was suggested that its origin was “perhaps Jamnitzer school”, a tentative attribution based on the comments made by Dr Ernst Kris, of the Kunsthistorisches Museum, Vienna, while he was in London studying the British Museum's Renaissance collections in the mid-1920s. The design of the frieze on this salt-cellar must have been familiar to Kris because shortly before, in 1922, he had published a lead plaquette (7.8 X 9.3 cm), the lower part of which incorporates every detail of this frieze (see E. Kris, Eine Modellplakette Wenzel Jamnitzers: Zur Motivverwendung in der Werkstatt der Spätrenaissance, ‘Archiv für Medaillen und Plakettenkunde’, V, 1922, pp. 136-43, pl. XIII). However, there is no evidence that during his London visit Dr Kris mentioned his 1922 publication or referred to the existence of the lead plaquette in the collections of the Bayerisches Nationalmuseum, Munich (inv. no. 16/347). Consequently, the crucial connection between the salt-cellar and the lead plaquette has remained unnoticed until now.

The lead plaquette in Munich was next published in 1966 (K. Pechstein, Jamnitzer-Studien, ‘Jahrbuch der Berliner Museen’, VIII, pp. 271 ff., figs 22 and 24) and was related to the decoration on a reliquary casket by Wenzel Jamnitzer, preserved in Madrid (Descalzas Reales). This interpretation was accepted in 1975 by Dr Ingrid Weber, who incorporated it into her full-scale study of German, Netherlandish and French Renaissance plaquettes from 1500 to 1650 (I. Weber, ‘Deutsche, Niederländische und Französische Renaissanceplaketten 1500-1650’, Munich, 1975, p. 152, no. 242, pl. 70) and dated it “after the middle of the sixteenth century”. Dr Weber was unable to refer to any other examples of this plaquette in any material. Neither Dr Pechstein nor Dr Weber makes any reference to the triangular salt-cellar in the Waddesdon Bequest.

Most recently the lead plaquette was lent to the exhibition 'Wenzel Jamnitzer und die Nürnberger Goldschmiedekunst, 1500-1700', held in 1985 in the Germanisches Nationalmuseum, Nuremberg (see ‘Wenzel Jamnitzer und die Nürnberger Goldschmiedekunst 1500-1700’, exh. cat., Germanisches Nationalmuseum, Nuremberg, 1985, p. 406, no. 499 in the Catalogue, where Dr Pechstein dates it “um 1560” and describes it as a model designed by Wenzel Jamnitzer himself). Again, no other example is cited, apart from the Madrid reliquary casket.

A close examination of the Munich lead plaquette reveals that the pilaster conforms correctly to the architectural principles of the Renaissance and that it does terminate in a capital, albeit a shallow Ionic one, with dentil ornament, drapery (at the sides) and, below, a mask. The omission of a capital on each of the six pilasters on the salt-cellar seems extremely unlikely if it had been made in the mid-sixteenth century. Even more puzzling was the substitution of the capital with a cluster of fruit between a pair of meaningless short 'scrolls'. This curious feature can now be explained, because on the Munich lead plaquette the pilaster is depicted passing behind a large oval cartouche, the frame of which is composed of a laurel wreath with two large scrolls at top and bottom; furthermore, between the two lower scrolls is a large cluster of fruit (in place of the laurel wreath) and from it depends a double half-swag.

The goldsmith who made the salt-cellar took the lower frieze of this plaquette and, in order to have a sufficiently long frieze, he included (at both ends of his frieze) the adjacent section of the pilaster, cutting it off at the same level as the moulding, just above the heads of the two putti.

By this action the goldsmith has included the cluster of fruit between two scrolls - but these are now transformed into short (and quite meaningless) truncated ribbon-scrolls. Furthermore, the goldsmith's pilasters on one side of the triangular salt-cellar abut the pilasters on the two adjoining sides, with the result that visually the half 'ribbon-scroll' on the outside edge of one frieze meets and joins up with the adjacent half 'ribbon-scroll' on the other frieze. When these two elements are united a curious, unorthodox motif, a loop almost resembling a dog-collar, is created at the corner of the salt-cellar.

These strange elements, so alien to the established repertoire of Renaissance ornament, have in recent years struck a note of increasing incongruity, especially as a mid-sixteenth-century object emanating from the circle of Wenzel Jamnitzer, the greatest of the Nuremberg goldsmiths of the early Renaissance, can be expected to follow faithfully the 'etiquette' of architectural ornament. There is little reason to believe that any contemporary of Wenzel Jamnitzer who might have obtained access to this quasi-architectural design for a part of Jamnitzer's reliquary casket in Madrid would use the lower section of it in so gauche and ill-informed a fashion on a triangular salt-cellar.

In addition, the salt-cellar has no town or maker's marks and the quality of the casting and of the surface finish is technically very poor. Most Nuremberg mid-sixteenth-century work of this character would be marked and would be of an impressively high technical standard. Yet on the salt-cellar the etched arabesque ornament is neither crisp nor subtle, and the band of 'arcading' on each of the three sides above the frieze is both imperfect and improbable - perhaps it is a misunderstood or debased form of the dentil ornament which occurs so skilfully executed on the lead plaquette in Munich.

In the context of these reasons for expressing doubt about the authenticity of this object, the design of the three feet seems less than reassuring. No feet comprising a comparable grotesque creature have been traced, and although the designs of Matthias Zündt (active in Nuremberg c. 1550-72) often incorporate fantastic creatures within the overall ornament, especially on the tall standing-cups (see ‘Wenzel Jamnitzer’ 1985, pp. 372-6, nos 370-81), none has a satyr's head and body transformed below the waist into a double-tailed marine creature. Furthermore, the three feet do not belong to the architectural design of the sides of the salt-cellar; they are simply joined on to the three corners, and they are not an integrated element.

Triangular salt-cellars were very fashionable among collectors in the nineteenth century, as a survey of the published catalogues quickly proves, and in England Lord Londesborough was no exception. Five of the triangular salt-cellars in his collection were illustrated in F. W. Fairholt, ‘An Illustrated Descriptive Catalogue of the Collection of Antique Silver Plate formed by Albert, Lord Londesborough, now the property of Lady Londesborough’ (privately printed, London, 1860, p. 26, pl. XX). Two of the five had an Augsburg mark, but the other three were unmarked and, judging from the line drawings in pl. XX, could belong to the large group of spurious silver salt-cellars of triangular form that were available by the middle of the century.

One of the workshops most experienced and qualified in copying Renaissance German silver was situated in Lucerne, Switzerland, and was run by the Bossard family (for an up-to-date concise account, see Dora F. Rittmeyer, ‘Geschichte der Luzerner Silber- und Goldschmiedekunst’, Lucerne, 1941, p. 268, pp. 307-8, pls 198-204; also Ernst Ludwig Richter, ‘Alles Silber: Imitiert-Kopiert-Gefälschl’, Munich, 1983, pp. 95-108 and figs 93-115). Many of the pastiches created by the Bossard workshop are fully marked with the Lucerne town punch-mark as well as their individual maker's punch-mark and even their firm's name: BOSSARD or I. BOSSARD (also a punch-mark). However, archival records and photographs currently being studied in Lucerne by Dr E-M. Lösel offer sound evidence to support the view that the Bossard workshop was responsible for making copies of Renaissance silver and for reproducing old-looking punch-marks on these spurious pieces. One such deception is the Nuremberg 'Hans Petzolt' ostrich-egg cup dated 1594 (Minneapolis Institute of Arts, USA). Purchased in 1954, it was until November 1984 exhibited (and much published) as one of Petzolt's finest works (J. F. Hayward, ‘Virtuoso Goldsmiths and the Triumphs of Mannerism 1540-1620’, Sotheby Parke Bernet Publications, London, 1976, p. 384, pl. 481). In 1984, with the full co-operation of Michael Conforti, Chairman and Bell Curator of Decorative Arts and Sculpture, the dated 'Hans Petzolt ostrich-egg cup' was taken apart during my visit to Minneapolis and the true nature of this fake was, in my view, confirmed. Although the evidence linking this forgery with the firm of Bossard is not yet conclusive, the likelihood is great and, equally, there is good evidence that towards the end of the nineteenth century the Bossard workshop was particularly interested in copying silver by Wenzel Jamnitzer (see Richter 1983, p. 100, figs 99-100). Consequently, the triangular salt-cellar may be a product of the Bossard workshop in the second half of the nineteenth century, when it was probably not difficult to obtain an impression of the lead plaquette that is now preserved in the Bayerisches Nationalmuseum. The insensitive, almost careless, misuse of a sixteenth-century source - like the way in which the lower part of the lead plaquette in Munich has been arbitrarily cut off to provide a strip of decoration for the sides of this salt-cellar - is matched in other products from the Bossard workshop. There is no full-scale publication on the activities of this family of goldsmiths, particularly of Johann Karl Bossard (1846-1914), who was active both as a goldsmith and as an antiquarian dealer, employing the gifted modeller and goldsmith Louis Weingartner from 1881 to 1901. The need for such a study is reinforced by a recent article by Dr Lösel concerning a tall covered cup dated 1893 (in the Landesmuseum, Zurich) for which the Bossard workshop drawing exists (see E-M. Lösel, Unserer Väter Werke, in ‘Unsere Kunstdenkmäler’, 37, 1986, pp. 19-28, figs 1-13, published by Gesellschaft für Schweizerische Kunstgeschichte, Zurich).

Finally, the fashion for silver salt-cellars of triangular form during the Renaissance is poorly documented, and although a number of marked examples have been recorded, they rarely have a known history extending back before the middle of the nineteenth century. Consequently, particular importance attaches to the survival of triangular salt-cellars from two treasure trove finds; one is the Pfreimd Treasure discovered in Oberpfalz. Its two Augsburg-marked salt-cellars were lent to the ‘Augsburger Renaissance’ exhibition (Rathaus, Augsburg, 1955, no. 595, p. 101) by the Museum für Kunst und Gewerbe, Hamburg (inv. no. 1929, 53). The maker's mark (R3 355) on the Pfreimd triangular salt-cellars has been most recently published as the punch-mark of the Augsburg goldsmith Clement Kicklinger (master 1561, died 1617) - see H. Seling, ‘Die Kunst de Augsburger Goldschmiede 1529-1868’ 3 vols., Munich, 1980, p. 61, no. 735. The other triangular, but also trilobed, salt-cellar from a treasure trove find was discovered in 1912 and published in Marc Rosenberg, ‘Der Goldschmiede Merkzeichen’, 3rd edn, Frankfurt, vol. II, 1923, p. 229, R3 2953d, pl. 60; it bore the punch-mark of Hans Liebmann (active c. 1597-1631; the exact dates are uncertain), a goldsmith of Kulmbach in Bavaria. Furthermore, this very ornate and fussily decorated salt-cellar by Hans Liebmann was engraved with armorial devices, initials and the date 1631.

Although the fashion in Germany for triangular saltcellars may have been established by the mid-century, there is no evidence, apart from the Waddesdon Bequest salt-cellar, to indicate that Jamnitzer's workshop produced any examples. In view of this salt-cellar's seriously disturbing features, there seem to be overwhelming reasons for discounting the printed attribution of 1927 and for returning to the 1902 formula of words but with added conviction. Its origin in a nineteenth-century workshop that for some reason had been able to copy the Wenzel Jamnitzer lead plaquette (now in the Bayerisches Nationalmuseum) - or another as yet unrecorded version of it -seems firmly established. Its tentative attribution to the workshop of Johann Karl Bossard in Lucerne has yet to be proved.