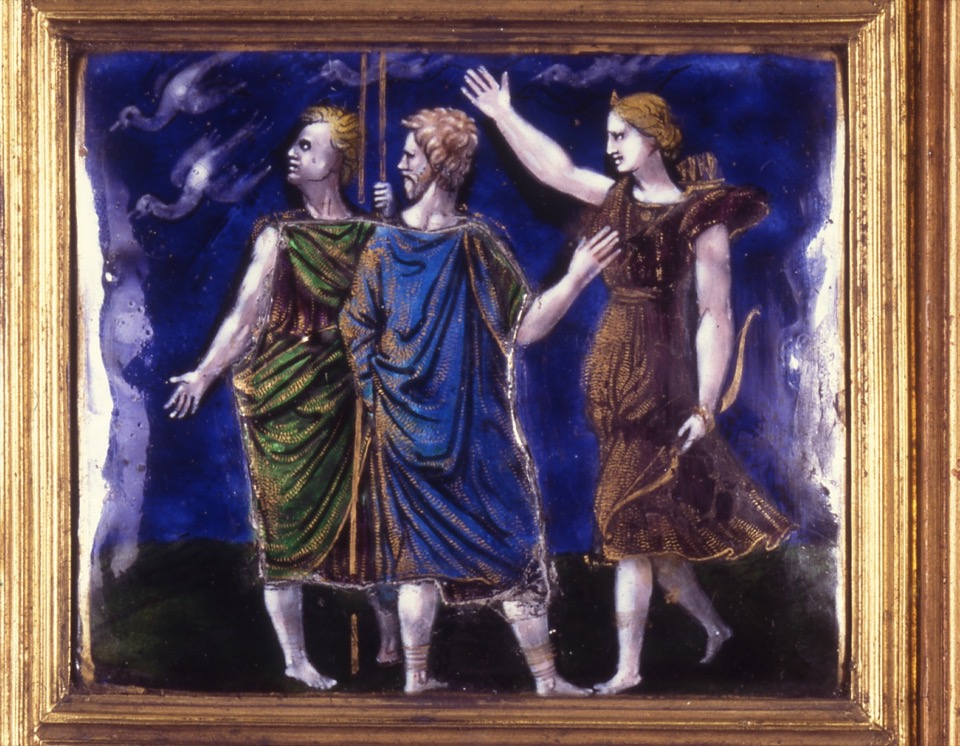 Subjects from the ‘Aeneid’

Neptune calms the winds. After a lost painting by Raphael which was copied in a famous print by Marcantonio Raimondi. The border scenes also copy the print. The panels with inscriptions and the frame are later additions, possibly put together by the dealer Frédéric Spitzer. Five panels are stamped on the reverse with a Pénicaud workshop stamp.

Provenance: Provenance: Purchased by Baron Ferdinand de Rothschild at the sale of the collection of Frédéric Spitzer in Paris in 1893.

Commentary: Text from Tait 1981: 'One of the most spectacular examples [of Limoges enamels] in the [Waddesdon] Bequest is the large composite panel of scenes from the Aeneid, in which ten separate plaques have been copied directly from an engraving by Marcantonio Raimondi entitled 'Quos Ego' (a reference to the interrupted threat made by Neptune to the Winds, Book I, verse 135). The engraving was probably designed to be used as a frontispiece to an Italian edition of Virgil, and the central composition of Neptune in his chariot stilling the winds is thought to derive from a lost painting by Raphael. Each of the ten plaques is stamped on the back with the punch-mark used by the Pénicaud workshop under Jean II Pénicaud and probably dates from about 1540-50. The extremely subtle nuances of the painting of the Neptune panel (in the centre) are undoubtedly indicative of the hand of the master himself, but the other nine polychrome panels are possibly the work of assistants.'

The frame and the five inscribed plaques are probably later, perhaps added by Spitzer, and are taken from the Marcantonio print.