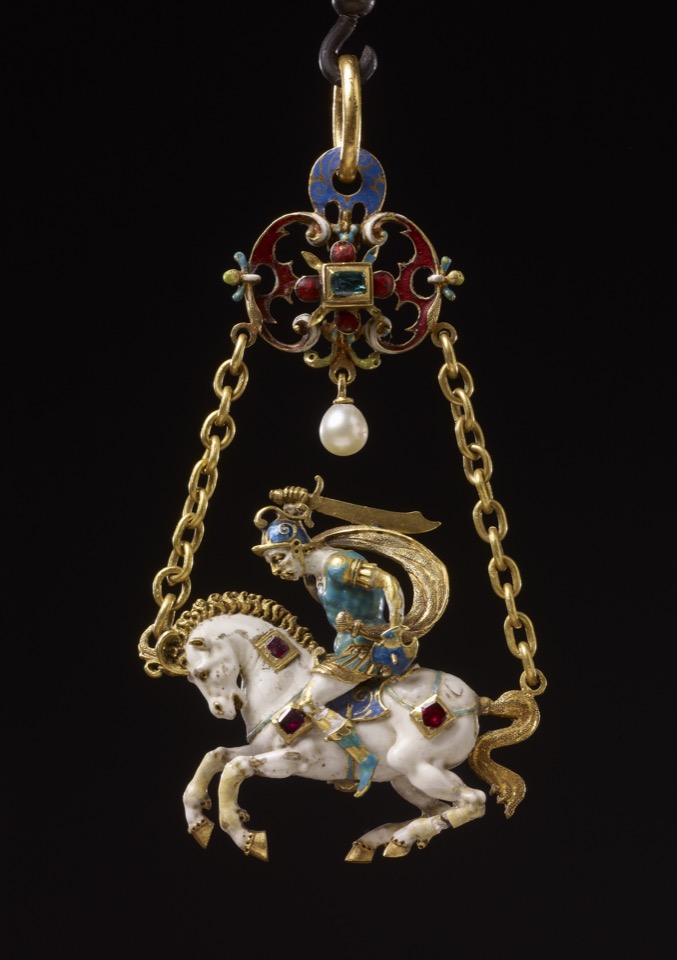 Pendant jewel; gold; enamelled; form of galloping white horse ridden by warrior dressed in helmet, cuirass and buskins; holds scimitar and buckler; one side of horse set with three rubies; plain chain with cartouche in open-work with central emerald and pendant pearl.

Commentary: Despite its imperfect state, this little figure group is impressive because of its excellent composition and its fine detail in the modelling of both horse and warrior. Another similar equestrian jewel has been preserved, albeit detached from its original setting, in the Grünes Gewölbe, the Elector of Saxony's Schatzkammer in Dresden (illus. in Hackenbroch 1979, fig. 594, where it is dated “c. 1600”, though no reasons for such a late dating are given as the text contains no discussion of the Dresden equestrian group). A less closely related equestrian jewel, now mounted on the cover of the Loffelholz gold cup (in the Germanisches Nationalmuseum, Nuremberg), is said to depict the Emperor Charles V in armour on a white-enamelled, gem-set horse, in the manner of Titian's famous painting in the Prado; it is, therefore, likely that this equestrian jewel would have been made c. 1550 (see Yvonne Hackenbroch, Some Portraits of Charles V, ‘Metropolitan Museum of Art Bulletin’, 27, 1969, pp. 330-1, figs 17-18).

In contrast, the only other closely related pendant jewel is so similar that it is almost a copy. It must be studied critically, as its authenticity is seriously to be doubted and it has no recorded history earlier than 1958. A fully illustrated description and discussion of it was first published in Parker Lesley 1968, pp. 129-30, where it was given the attribution “South German, late 16th century”. Parker Lesley drew attention to the fact that it was a slightly smaller version of the Waddesdon pendant and that there were other minor differences both in the enamelling and the application of gemstones. What he did not mention was the significant alteration in the position of the rider; the warrior does not sit down on the horse, gripping with his knees, but, instead, his knees are above, or in line with, the saddle, giving him a precarious appearance on the horse. His body is more erect and in no way expressive of that union of movement that exists between rider and galloping horse. Consequently, a larger space exists between the warrior and his billowing drapery, which is not only set with a diamond in the middle but has both ends of the drapery curled round the rider's two arms, instead of being attached by a large knot to his waist on either side. A table-cut diamond is set in the chest of his cuirass, which has an elaborate design reserved in the gold against the opaque blue enamel, a second diamond is set in his helmet and a third in the centre of his buckler, which has not retained a convincing shape - indeed, it was described by Parker Lesley as a “modified cross patée”. Finally, the girth below the horse's belly has been enriched with a table-cut diamond in a rectangular gold collet, set vertically, so that the diamond cannot fail to be seen from the front - regardless of the fact that the view from the other side is undecorated and even more ridiculous. The lower edge of this gold collet has a suspension loop, from which hangs a pearl, dangling between the horse's hooves.

It is, perhaps, not surprising that the enamelling on the Gutman Collection example was stated to be in a far better condition, when Parker Lesley described it in 1968, and this fact was confirmed when it came to be sold with the rest of the Melvin Gutman Collection at Parke-Bernet (New York) on 24 April 1969, lot 85. It was subsequently published in the exhibition catalogue ‘The Art of Jewelry, 1450-1650’ (the Martin D'Arcy Gallery of Art, Loyola University of Chicago, 1975, no. 28) and, recently, was illustrated in Hackenbroch 1979, fig. 412, incorrectly captioned as in the “British Museum, Waddesdon Bequest”.

In each case a late sixteenth-century date for the ex-Gutman Collection version of this pendant has been suggested, but in none of these publications has there been any attempt to discuss and analyse the similarities and differences of these two jewels. The enamelling of the rider and the horse is not the same. Parker Lesley's detailed description reveals that the goldsmith who made the ex-Gutman Collection example did not use a translucent blue at all; indeed, in two of these areas (i.e. the saddle and the buckler) he used a translucent red enamel, but in the case of the helmet a black enamel. This goldsmith also used black enamel for the buskins, the lappets below the cuirass, details on the arms and the horse's eyes. In contrast, the Waddesdon pendant has no black enamel.

The 'cartouche' on the ex-Gutman Collection version appears to have the same origin as that of the Waddesdon pendant - presumably mid-nineteenth century. The unity of quality and palette between the ex-Gutman Collection pendant's 'cartouche' and the equestrian group itself, which is scarcely damaged, seems to indicate a common origin. Apart from the excessive application of gemstones (all table-cut diamonds, in fact), including the location in unlikely places such as the front of the helmet, the middle of the billowing drapery, and slung below the horse's belly, there is the crude method by which these extra diamonds are affixed. The reverse of the jewel (see Parker Lesley 1968, p. 130) reveals that a crude 'butterfly-clip' through the billowing drapery holds that diamond in place.

Furthermore, Parker Lesley records that both the rider and the horse belonging to the ex-Gutman Collection pendant “are hollow cast and held together by the bolt through the center, which also serves as a base of the table-cut diamond under the horse's belly”. This method of construction was not used by the maker of the Waddesdon equestrian group and, indeed, does not accord with Renaissance practice, as far as it has been reliably established.

Finally, Parker Lesley has also recorded that the buckler, the billowing drapery and the tail are “cast separately”, and that they are “attached by flanges and bending to the figure” and the tail is soldered to the horse's body. Again, this method is not paralleled on the Waddesdon pendant and bespeaks a modern origin. For a further discussion of several dubious jewels in the 'Renaissance style' fashioned in the form of animal pendants with riders see Hugh Tait (ed. and contrib.), ‘The Art of the Jeweller, A Catalogue of the Hull Grundy Gift to the British Museum: Jewellery, Engraved Gems and Goldsmiths’ Work’, London, 1984, pp. 45-6, no. 272.