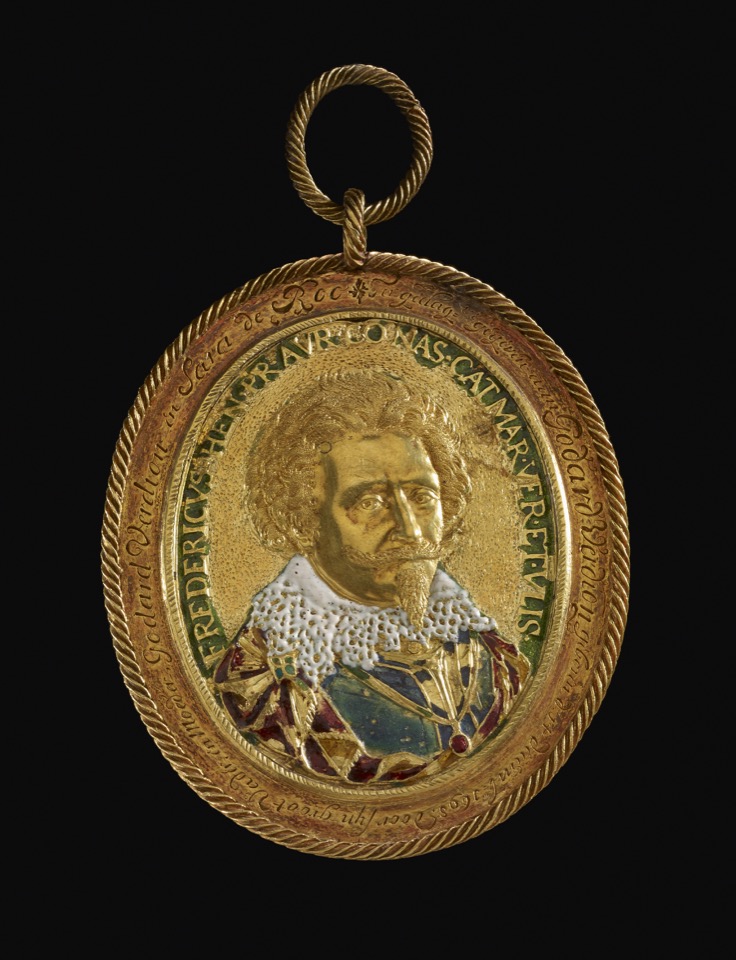 This portrait medal commemorates the Order of the Garter being conferred on Frederick Henry, Prince of Orange by King Charles I of England in 1627. The border was added in 1698 when the medal was presented by the jeweller Godard Verdion to his grandson as a treasured heirloom.

Condition: Some loss of enamel on both faces of the medal, but otherwise in a good state of preservation.

Provenance: None is known, apart from that contained in the engraved inscription on the flat border, which appears to have been added to the gold enamelled medallion soon after 14 December 1698.

Commentary: With the help of Dr H. Enno van Gelder and Dr Gay van der Meer, of the Koninklijk Kabinet van Munten, Penningen en Gesneden Stenen, The Hague, many of the biographical details have now been confirmed and, indeed, expanded:

(i) The grandfather, Godard Verdion, was born in Rouen in 1648-9; although his father's name is not recorded, his mother's surname was Heermalen. As a young man, he evidently established himself as a jeweller in Batavia and later became a prominent citizen there, enjoying the positions of deacon, of Vice-President van Weesmeesteren and of Captain of the Militia. He died there on 19 January 1702. As early as 1676 he married Catharina Boddens (born in Wageningen in 1658-9). Their son, Willem, was born in Batavia on 14 October 1677. Catharina died in 1694, and three years later Godard Verdion married Sara de Roo, the widow of a merchant named Cornelis Comans. Sara de Roo had been born in Batavia on 25 January 1657, the daughter of the Chief Surgeon.

(ii) Willem Verdion, at the age of twenty, married his stepsister, Cornelia Comans, the daughter of Cornelis and Sara de Roo (the second wife of Godard Verdion). Willem Verdion died very young in Batavia on 12 September 1709, seven years after his father's death. He left a son, Godard, christened in Batavia on 18 December 1698.

The gold enamelled medallion is first recorded in Batavia in 1698 when it was presented by the grandparents, Godard Verdion and Sara de Roo, to their newly born grandson, Godard. Because the grandfather was a jeweller, it would have been a simple matter for him to add the flat border with its incised inscription, cable rim, pendant loop and ring. The gift of such a treasured heirloom by the grandparents is consistent with all the facts that have now been brought to light from the Landsarchief Batavia but, unfortunately, the subsequent history of this pendant medallion remains a mystery.

At present there is no explanation for the jewel's survival in Godard Verdion's possession in Batavia but, as a jeweller, he could have acquired it in a number of ways. Certainly this treasured family possession seems to have been cared for because a remarkably large proportion of the enamelling has survived, despite its fragility and the unsuitable conditions of Batavia.

The gold medal had been struck in 1627 to commemorate the Order of the Garter being conferred on Prince Frederick Henry of Orange by King Charles I of England. The links between the House of Orange and the House of Stuart were close throughout this century. Prince Frederick Henry himself had come to London in 1612 for the wedding of James I’s daughter, Elizabeth (the Winter Queen) to the grandson of William the Silent, who became Frederick V of Bohemia; after their political misfortunes, the exiled court of the Winter Queen was established in The Hague and was to play an important role, both intellectually and culturally. Prince Frederick Henry (1584-1647) had succeeded as Stadtholder in 1625, and in the same year was married. The first child (Prince William) was later to be married to Charles I’s daughter, Maria Henrietta Stuart (born in 1631), and their son in due course married Mary Stuart and later became William III of England. It was, therefore, a carefully calculated gesture when in 1627 the Order of the Garter was conferred on Prince Frederick Henry; few foreign knights were created, and usually the honour was a reflection of the excellent relations between the two ruling dynasties.

The motto adopted by the Prince ('To my father and my country') is correctly rendered in Latin on this medal, but the spelling of HONY in the Garter motto is irregular - perhaps because it was made abroad in Holland. At present the creator of this very fine portrait medallion is thought to be Adriaen Rottermont (see M. Flohil, De Portretpenningen van Adriaen Rottermont in ‘Jaarboek voor Munt-en Penningkunde’, 42, 1955, pp. 77-90). With the evidence discovered by Mr Beltjes in the archives of Culemborg the master AR could definitely be identified with Adriaen Rottermont, whereas previously he was thought to be the Saxon engraver Abraham Riese. Three signed portrait medals were known to Mr Flohil, and on stylistic grounds six others were attributed by him to the same artist, including the 1627 portrait medal of Prince Frederick Henry of Orange. All are extremely rare, except for the 1615 medal of Maurice, Prince of Orange (no. 5 in Mr Flohil’s group of nine portraits).

The Garter medal of 1627 is known in silver versions (both in the Koninklijk Penningkabinet in The Hague and in the Department of Coins and Medals in the British Museum), but no other gold examples have yet been recorded. Curiously, Mr Flohil does not mention that it is made of gold - indeed, he states that it is made of silver, gilded and enamelled. The silver version of this medal is described in Edward Hawkins's ‘Medallic Illustrations of the History of Great Britain and Ireland to the death of George II’, London, 1885, vol. I, p. 246, no. 18; see also Gerard van Loon, ‘Histoire métallique des XVII des Pays Bas depuis l'abdication de Charles-Quint jusqu’à la paix de Bade en MDCCXVI’, vol. II, The Hague, 1732. They show that in creating this gold enamelled version the goldsmith has produced a differently shaped lace collar on the right side. This alternative design was probably made in an attempt to simplify the problems of keying the enamelling. Mr Flohil is surely wrong in asserting that the enamelling on the gold portrait medallion was executed by Godard Verdion in Batavia, and for that reason the colours are not heraldically correct on the coat of arms (on the reverse). The enamelled colours on these ‘gnadenpfennige’ are rarely accurate in heraldic terms, and as yet there is no evidence that Godard Verdion was an enameller, let alone a skilled one, using a brilliant range of colours known only on the very best European gold objects. Furthermore, it is difficult to understand how Godard Verdion could have obtained a gold version in which the lace collar had been deliberately altered but on which no enamelling had been carried out. The style of this enamelled gold medal is very close to the contemporary German fashion for ‘gnadenpfennige’, and it is interesting to note that they are occasionally similarly enamelled so that the heads are silhouetted against a backcloth of coloured enamel. For a medal of 1572 depicting Wilhelm V of Bavaria (1548-1626) decorated in this way with a totally undamaged green translucent enamelled background see the Victoria and Albert Museum's example, which was catalogued in ‘Princely Magnificence, Court Jewels of the Renaissance, 1500-1630’, ed. A. Somers Cocks, exh. cat., Victoria and Albert Museum (Debrett’s Peerage Ltd), London, 1980, (no. 79).

Another late sixteenth-century example where the coloured enamel background extends from the outer edge, through the band of gold lettering of the encircling motto, across to the raised edges of the profile head, is the famous Armada Jewel (formerly in the Heneage family, the J. Pierpont Morgan Collection and in 1935 presented by Lord Wakefield to the Victoria and Albert Museum). According to tradition, this jewel with its gold bust in relief of Her Majesty against a blue enamel ground was given by Queen Elizabeth to Sir Thomas Heneage (d. 1595), a privy counsellor and Vice-Chamberlain of the Royal Household, in celebration of the defeat of the Spanish Armada. Essentially, this Armada Jewel is an English version of a ‘gnadenpfennig’, although the reverse and the interior are exceptional and highly individual elaborations, rarely found among extant German examples.

For a contemporary gold pendant medal, see the 1627 ‘gnadenpfennig’ of Frederick V, King of Bohemia and Count Palatine, in the British Museum (Hugh Tait (ed. And contrib.), ‘The Art of the Jeweller, A Catalogue of the Hull Grundy Gift to the British Museum: Jewellery, Engraved Gems and Goldsmiths’ Work’, London, 1976, no. 300, p. 184, where the reasons for a Dutch, rather than a German, origin are set out). The medal itself is not enamelled, but the laurel-wreath frame and attached loops are enamelled in green and blue; the resulting pendant jewel is one of the most beautiful examples of this class.

For a further discussion of ‘gnadenpfennige’ see WB.180.