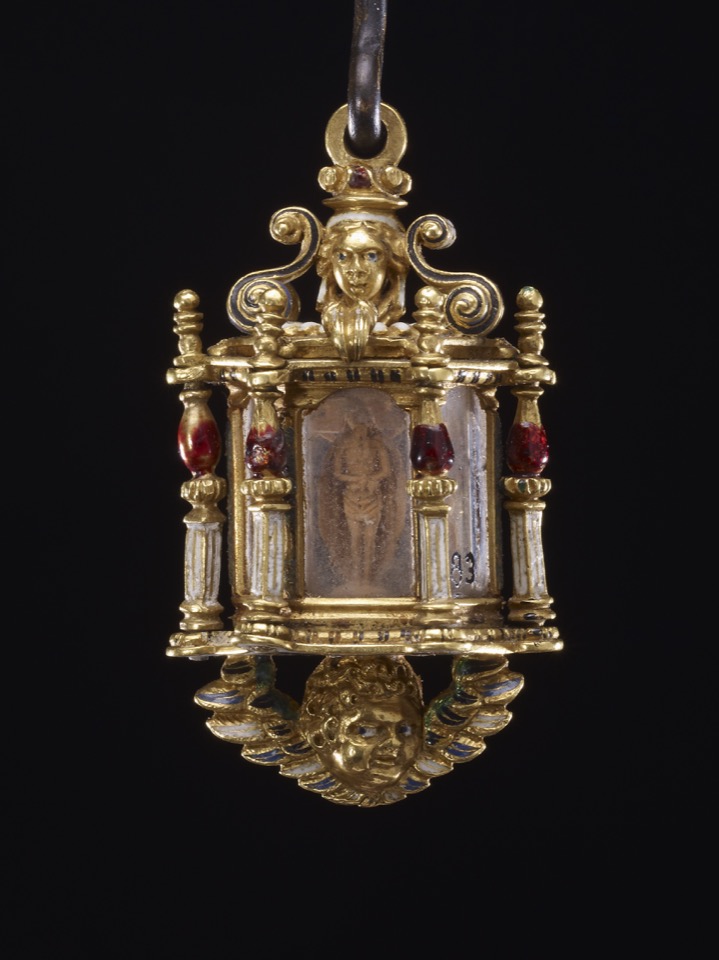 Shaped like a lantern, with miniature devotional carvings in wood inside a rock crystal case. On one side, the Crucifixion, on the other, Christ displays his wounds. The pendant belongs to a group, some of them including hummingbird feathers, which can be attributed to Mexico from 1550–1600.

Commentary: This jewel is probably one of the most carefully and skilfully executed examples in this small distinctive category. A number of these lantern-shaped rock-crystal devotional pendants containing minute religious wood-carvings have been recorded and published but with little agreement about their origin.

In the late nineteenth century opinion seems to have favoured a North European origin, and both Read (1902) and the authorities at the Louvre, where there are three examples (MV 386-8), attributed them to a German workshop in the late sixteenth century. In Dalton 1927 this attribution remained unchanged but a Mediterranean origin became an acceptable alternative after the Second World War, when, for example, Filippo Rossi (in ‘Italian Jewelled Arts’, London, 1957, pl. LXIIC) described one of them as “Italian, 16th century” and Parker Lesley (Parker Lesley, ‘Renaissance Jewels and Jewelled Objects from the Melvin Gutman Collection’, Baltimore Museum of Art, Baltimore, 1968, p. 63, no. 16) proposed a “Spanish workshop c.1590” for the rectangular version in the Melvin Gutman Collection. However, when that same piece was lent to a special exhibition at the Martin d'Arcy Gallery of Art, Loyola University of Chicago, Rowe (Donald F. Rowe, ‘The Art of Jewelry, 1450-1650’, exh. cat., Martin D’Arcy Gallery of Art, Loyola University of Chicago, 1975, no. 30) pointed out that “a Flemish attribution is possible for there was in that country a tradition of small-scale carvings, such as in the prayer beads. The political situation of the Spanish in the Lowlands could give rise to Spanish elements in the framing device and more of the Flemish tradition in the carvings”.

Nevertheless, there is ample evidence to show that European taste in this field during the sixteenth century had increasingly favoured enamelled goldsmiths' work and that the microscopic wood-carvings had become less fashionable before the middle of the century. Rock-crystal enclosing gold enamelled reliefs and figures became a great art especially in Spain; the beautiful IHS heart pendant from the Treasury of the Cathedral of the Virgin of the Pillar, Saragossa (now in the Victoria and Albert Museum, and published in Charles Oman, The Jewels of Our Lady of the Pillar at Saragossa, ‘Apollo’, June, 1967, pp. 400-6, fig. 4) is an excellently preserved and well-documented example. These minute wood-carvings are not particularly accomplished, and the suggestion that they may be the work of Mexicans, working under the supervision of the Spanish missionary fathers, is more convincing, especially as a background of blue featherwork occurs in the example in Baltimore (see Diana Scarisbrick, in ‘Jewellery, Ancient to Modern’, exh. cat., Walters Art Gallery, Baltimore, 1979, p. 183, no. 501.) The Mexican coloured feather-mosaic work was a much esteemed skill in Mexico that reached the highest levels shortly before the Spanish Conquest, but only a few fine examples with Christian subjects, like the Medici mitre in the Palazzo Pitti, have also survived in Europe.

Furthermore, the survival of a Mexican silver-gilt chalice set with a rock-crystal tempietto of this type enclosing minute wood-carvings of the Apostles against a background of feather-mosaic work does indicate that this proposed Spanish colonial origin may be correct. The chalice was formerly in the William Randolph Hearst Collection, and in 1948 was acquired by the Los Angeles County Museum. During the author's detailed study of the chalice in Los Angeles its authenticity and late sixteenth-century origin were confirmed. The chalice had been briefly mentioned and illustrated in the 'Addendum' in Charles Oman, ‘The Golden Age of Hispanic Silver 1400-1665’, London, 1968, p. 57, figs 278-9; this book, which was a catalogue of the Victoria and Albert Museum's collection, recorded the similarity of the Mexican mark stamped clearly on the foot of the chalice in Los Angeles (inv. no. 48.24.20) to the one stamped on a Victoria and Albert Museum piece (no. 104). In addition, Charles Oman stated that both pieces dated from the last quarter of the sixteenth century, along with a tiny, silver-cased carved boxwood triptych with a background of humming-bird feathers in each of the five scenes of the Passion (no. 104a, figs 275-6). Although the little triptych is unmarked, Charles Oman was confident that it could be attributed to a late sixteenth-century workshop in Mexico on the evidence of the Los Angeles chalice, the foot of which is not only richly embossed with figures, scenes from the Passion and ornamental motifs in the Renaissance manner but is also set with four minute wood-carvings under rock-crystal covers, one of which (the Entombment) has survived with its background of humming-bird feathers. Of the remaining three, one (the Agony in the Garden) still retains some traces of its humming-bird feathers adhering to the intricacies of the wood-carving; however, all three have now been mounted on a plain white background, which creates a very different effect. Although the four carvings are unpretentious, they have a direct expressiveness and a most convincing spontaneity - even the difficult crowded St Veronica scene is effectively handled - but there is one interesting error in the Scourging of Christ scene, where the Cock that crowed thrice in St Peter's presence has been placed on top of the Column.

The goldsmith, who was responsible for the very talented treatment of the shaped foot of the chalice, has skilfully incorporated these four carvings, flanking each with a standing figure of an Evangelist (on the one side) and a Latin Father of the Church (on the other). Using the full range of Late Renaissance ornamental motifs, the goldsmith has embossed and chased not only the three zones of the foot but also the stem and the lower part of the bowl. The quality of his work in these decorative friezes is no less fine than in his four relief scenes from the Passion of Christ on the foot, and it is particularly noticeable on the stem where immediately above and below the hexagonal rock-crystal tempietto this small-scale sculptural detail is well-preserved. The two smaller knops of rock-crystal that form part of the stem may be original, although neither seems entirely convincing and, indeed, the stem could have been assembled in this form at any time. Certainly, the plain bowl of the chalice that fits inside the embossed lower 'calyx' is not original, but when chalices are kept in use for liturgical purposes it is customary to have the bowl renewed at regular intervals.

Unlike this Waddesdon lantern-shaped pendant, the tempietto on the stem of the chalice is a true hexagon and, being much larger, it is designed with six individually carved reliefs, each composed of a pair of full-length Apostles, standing under a double shell niche, with architectural mouldings above and below. These little wood-carvings, although not of the highest quality, are fine examples of their genre, with features consistent with a late sixteenth-century Mexican origin, especially the background of humming-bird feathers to give colour and depth to the reliefs. The figures are treated with considerable variety, although the choice of a lance and a halberd for two of the Apostles to hold is exceptional, even in Mexico.

There seems no reason to doubt the evidence of this Mexican chalice, and certainly Charles Oman, after many years of study of Hispanic plate, was satisfied and included it in his major book on the subject. When taken in conjunction with evidence published by Theodor Müller in Das Altarchen der Herzogin Christine van Lothringen in der Schatzkammer der Münchner Residenz und Verwandte Kleinkunstwerke' (‘Zeitschrift für Bayerische Landesgeschichte’, bd 35, heft I, 1972), it would seem, therefore, that the Mexicans, under the tutelage of the Spanish missionary fathers, probably quickly learnt to carve these religious scenes.

The enamelled goldsmith's work on the Waddesdon jewel may also have been carried out in New Spain. However, as the quality seems as high as that found in Spain itself, the attribution can be made only tentatively, although it must be stressed that the goldsmith who made the Los Angeles chalice was a superior craftsman to many working in Europe at the end of the sixteenth century.