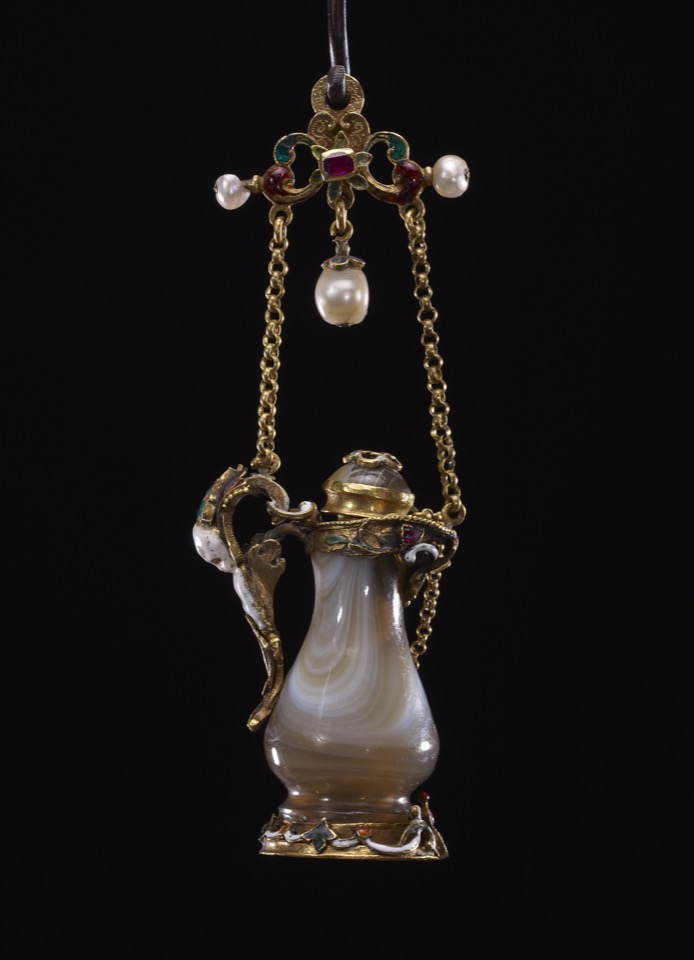 Origin: Uncertain; probably from a 17th-century provincial workshop in Central Europe. The chains and the 'suspension cartouche' were added in the 19th century.

Commentary: The insensitive attachment of a pendant loop to the pouring lip, destroying the essential character of the ewer, is a nineteenth-century feature. The need to have one suspension chain longer than the other in order to keep the ewer in a vertical position is as distracting as the unnecessarily long chain now attached to the stopper. The nineteenth-century conversion of this piece into a pendant jewel necessitated the provision of a suspension 'cartouche' above the chains; the one supplied on this occasion has no features, technical or stylistic, to relate it to the gold enamelled mounts on the agate scent-bottle. The traditional attribution of this piece to a French workshop in the seventeenth century was first published in Read 1902 and was again accepted in Dalton 1927. However, the absence of comparable French material of attested provenance makes this attribution now seem less likely. The treatment of the handle with the white-enamelled Cupid is reminiscent of the general style of French enamelled gold mounts in the period of Cardinal Mazarin (b. 1602 - d. 1661), but, even allowing for the minute scale, the quality of definition and workmanship seems inferior. Furthermore, the style of the enamelling on the mounts around the neck and foot does not quite accord with that on the handle, for in this period in France these rim mounts would have had white enamel overpainted with coloured enamel decoration.

Scent-bottles of the first half of the seventeenth century are exceptionally rare, but fortunately there is one example of unquestionable authenticity that has survived in almost perfect condition complete with its suspension chain. It was discovered as recently as 1912 and is part of the famous Cheapside Hoard, found near St Paul's Cathedral and now preserved in the Museum of London. (For the most recent publication, including a colour illustration of the scent-bottle, see Tait in ‘Princely Magnificence, Court Jewels of the Renaissance, 1500-1630’, ed. A. Somers Cocks, exh. cat., Victoria and Albert Museum (Debrett’s Peerage Ltd), London, 1980, pp. 87-9, no. 120.) The Hoard was one of the most spectacular finds with a vast array of jewellery, dress ornaments, engraved gems and cameos, watches, rock-crystals, etc. - many of unique form and design. Most of the jewellery can be dated to the first three decades of the seventeenth century, and it would seem that the Hoard was probably deposited and hidden shortly before the Civil War, which began in 1642. The gold scent-bottle in the Hoard is an important document of the early seventeenth century, although whether of English or French origin is uncertain. Its outer surface is enamelled in white with ornamental details painted on top in coloured enamels, but the greater part of the surface is covered by the four carved chalcedony plaques and the numerous gemstones (rubies, topaz, and diamonds) in gold settings, sometimes linked together with a gold openwork design qjouré. This enamelled effect is continued on to the cover and on to the short suspension chains - all studded with little gem-stones and lots of enamel. The goldsmith has made not only a highly decorative piece of jewellery but one that is also highly functional, both stable (when not hanging by its chains) and airtight (when covered).

By comparison, the agate scent-bottle in the form of a ewer seems to have been conceived in a different tradition, more akin to those hardstone vases and cups sought after by collectors like Cardinal Mazarin for their cabinets. However, the tiny scale of this miniature piece and the clumsy execution of its mounts make its former attribution to a French workshop in the seventeenth century improbable. A Central European origin now seems more likely - perhaps from one of the centres renowned for the traditional skills of fashioning and polishing hardstones.

The little agate scent-bottle may be related to the fashion in the late sixteenth century for ladies at court to wear girdles for perfume - 'un cinto di proffumo', as is recorded in the 1585 Medici list (Archivo di Stato, Florence, Misc. Medicea, 12.N.I.). These girdles were often made of a combination of gold and rock-crystal, and the same 1585 Medici list even included one with agate: “Un cinto d'agato et bottoni d'oro che sono 38 agate et 38 bottoni, con un vaso d'oro.” The perfume was probably carried in the vase at the end of the girdle which often reached almost to the ground.

In England agate was clearly much used in court jewellery, as the lists of New Year's gifts to the Queen indicate:

1583-4: Item, a smale bottel of agath, garnished with golde and smale sparcks of rubyes and diamondes hanging by a small chaine of golde, garnished in like manner.”

These entries give the impression that little scent-bottles or pots were often made of agate, and although this example is probably not as early, it may well be a product of this tradition in the seventeenth century and subsequently converted into a collector's item by the addition of the suspension chains and the 'cartouche'.