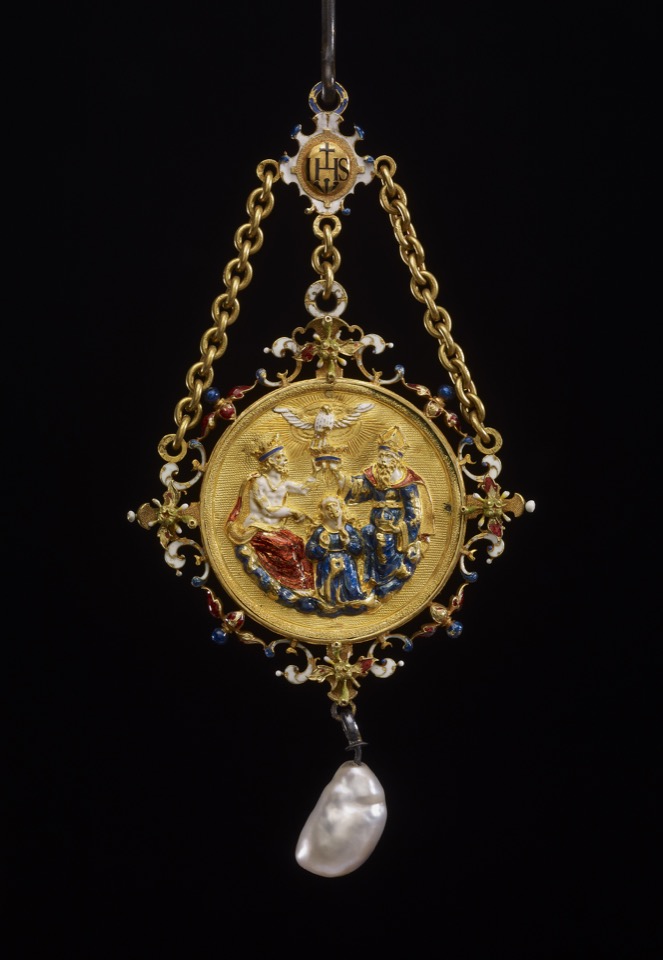 Pendant, the Coronation of the Virgin

Either made as new in Paris or made from old and new elements, before it was recorded in 1866.

Germany
Paris (or)
German or Paris

Origin: (i) The relief of the Coronation of the Virgin: German, probably late 16th century.

(ii) The relief of St George and the Dragon (on the reverse): modern.

Provenance: Baron Anselm von Rothschild, Vienna, before 1866. Although there is no record of when Baron Anselm acquired the jewel, it is clear that at some time after 1838 and certainly before 1866 (when it was definitely part of Baron Anselm's collection in Vienna), this pendant may have been in Paris, since the two suspension rings on either side of the frame have been struck with the Paris restricted warranty mark; however, there is no evidence to confirm that the jewel was in exactly the same state when it was in Paris. There remains the possibility that it was altered after it came to Vienna and before it had entered Baron Anselm's collection; it has not been altered since it was described by Franz Schestag.

Commentary: The mid-nineteenth-century origin of the St George roundel (on the reverse) seems not to have been recorded in Schestag 1866, where the figure is erroneously described as St Michael and this double-sided pendant jewel is catalogued as “16. Jahrh”. In Read 1902 “the medallion of St George being modern” was unambiguously stated, but for the rest it was catalogued as “French, 16th century”. However, in Dalton 1927 the attribution is more cautiously expressed as “French or German, 16th century”, while the modern origin of the St George medallion was emphatically re-stated.

A German origin for the Coronation of the Virgin relief now seems undoubtedly more likely because, although not previously noted, the source seems to be unquestionably German. It is the famous composition created by Albrecht Dürer in 1509 when he painted the Heller Altarpiece for the Dominkanerkirke in Frankfurt. The central panel of this Altarpiece with its Coronation scene in Heaven and, on Earth, the empty tomb surrounded by the Apostles is now destroyed, because after Maximilian of Bavaria had succeeded in purchasing it from the Dominicans in 1615 it remained in Munich until 1720, when it was tragically burnt. Fortunately, a faithful copy painted by Jobst Harrich shortly before the sale in 1615 is now preserved in the Historisches Museum, Frankfurt (see Gisela Goldberg, Dürer-Renaissance am Münchner Hof, ‘Wittelbach und Bayern’, ed. Hubert Glaser, vol. II, pt. 1, 1980, pp. 318-22, pl. 180; also C. White, ‘Dürer’, London, 1971, no. 49, p. 126). The only significant difference is in the figure of God the Son, who in the painting is shown wearing a papal tiara and using both his hands to hold the crown over the head of the kneeling Virgin. In all other respects the two compositions are essentially the same, though the goldsmith's version is, of necessity, greatly simplified and many details are omitted in order to work the relief on such a tiny scale.

Such a gold enamelled roundel might have been closely paralleled among the German Renaissance bronze plaquettes, but no recorded example is the same (see Ingrid Weber, ‘Deutsche, Niederlandische und Französische Renaissanceplaketten, 1500-1650’, Munich, 1975). Dr Weber's comprehensive survey shows that the subject remained popular in Southern Germany; indeed, several of those plaquettes attributed to Augsburg are variants of the famous Dürer composition, and at least one shows God the Son stretching out his left arm to hold the crown above the Virgin, instead of the more usual solution in which the right arm reaches across to the crown. Dr Weber has attributed these few plaquettes, all of which bear a fair degree of similarity to the Waddesdon jewel, to a late sixteenth-century workshop in Southern Germany, perhaps in Augsburg. By the end of the sixteenth century Dürer's work was so greatly admired that there was a wave of revival - a kind of 'Dürer Renaissance'. It may well be that this Waddesdon Coronation of the Virgin relief belongs to that movement, which was led by the Emperor Rudolph II himself.

There is a very interestingly related jewel in the Imperial Hapsburg collections in Vienna, which comprises a silver-gilt roundel of the Coronation of the Virgin executed in relief and reputedly with touches of blue enamel; this roundel is set within a Renaissance frame of gold enamelled in white, translucent red and opaque pale blue (see ‘Katalog der Sammlung für Plastik und Kunstgewerbe II’, Kunsthistorisches Museum, Vienna, 1966, no. 277; also Somers Cocks in ‘Princely Magnificence’ 1980, no. 64, col. illus. p. 68). The roundel depicts the Trinity, but God the Father is placed in the centre with a kneeling crowned figure of Christ on the left, facing the kneeling Virgin who is also wearing a crown; two angels flank God the Father, and several cherub-heads support the clouds beneath the group. The style of the roundel is undoubtedly reminiscent of the German Late Gothic style, and Somers Cocks has emphatically stated that it “dates from the end of the 15th century. ... It is very likely that this medallion was given its very fine frame in the imperial workshops at Prague around 1600”. Certainly, the frame is of the high quality that one associates with the court of Rudolph II, though it is scarcely a work of sufficient distinction to exclude other possibilities. However, the silver-gilt roundel does not depict the Coronation of the Virgin scene in the way that Dürer had created it for the famous Heller Altarpiece -a work that would have been known to the Emperor Rudolph II.

In conclusion, there no longer seems to be any reason to suggest a French origin for this relief. The St George medallion, on the other hand, could have been made in Paris in the middle of the nineteenth century at the time when the Coronation of the Virgin relief was being reset. There is, at present, no possibility of taking this jewel apart, but it seems likely that the Coronation of the Virgin relief was originally set in another object - probably some ecclesiastical piece of jewellery or a devotional object such as a reliquary.