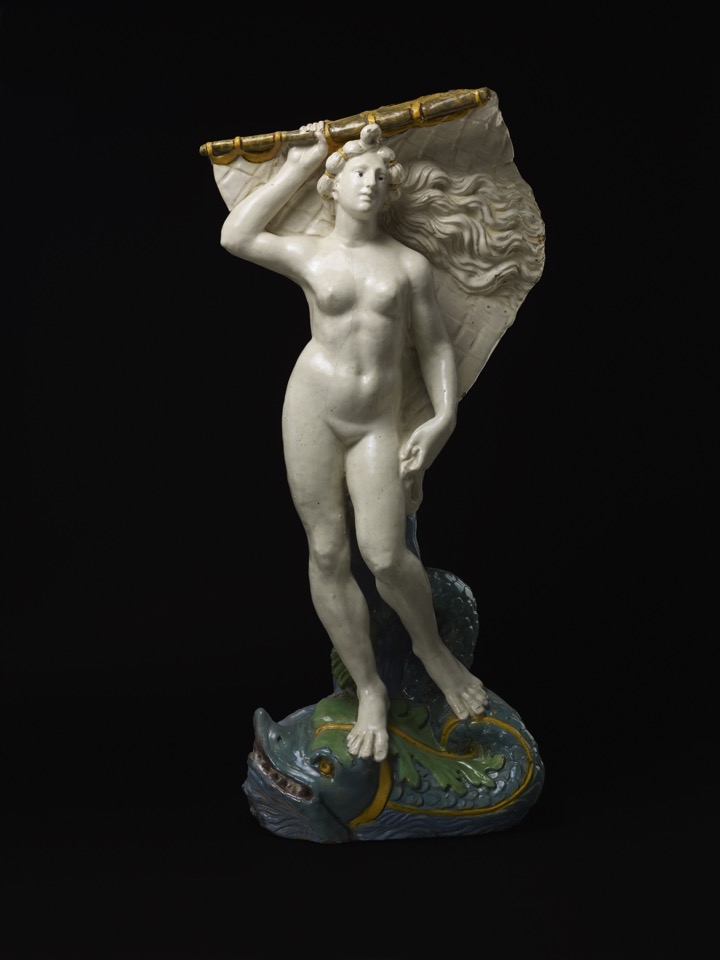 Fortune stands on a dolphin, holding a sail while her hair streams in the wind. Her graceful pose evokes Botticelli’s The Birth of Venus. This impressive figure is perhaps from a fountain in a Florentine Renaissance palace. She represents the height of technological achievement of her time, as a sculpture in ceramic.

Commentary: From Thornton & Wilson 2009: 'The subject of WB.65 was identified in the first Waddesdon catalogue as the Nereid Amphitrite, goddess of the sea and wife of the sea god Neptune. The sail indicates, however, that she is more likely to be the goddess Fortuna, an identifiaction confirmed by the existence of two anonymous 15th-century Florentine prints and another by Nicoletto Rosex da Modena, showing Fortuna standing upon a dolphin. This iconography of Fortuna in a maritime context may be related to Horace's description of the goddess as a "mistress of winds and waves" ("Odes", I.XXXV) and appears to have been particularly prevalent in Florence, where leading merchants' fortunes often depended on the safe passage of their ships. The Rucellai family's arms, as placed on the façade of the church of S. Maria Novella and on their palace, were even surmounted by a figure of Fortune standing upon a ship.

Read attributed WB.65 to the Della Robbia workshop, but it was not recorded by Marquand and has not been discussed elsewhere in the Della Robbia literature. However, it appears to date from the early 16th century and to be a characteristic sculptural work of Giovanni della Robbia, the second of the five sons of Andrea della Robbia who joined their father in the family workshop. First named in documents in 1487, from around 1500 Giovanni began gradually to displace his father as the dominant figure in the workshop. WB.65 may be related to a number of small standing figures, in particular two groups of female figures, the "Dovizia" and "Judith", made by Giovanni in the years around 1520, with varying degrees of workshop participation. Although these figures are smaller, robed, and generally more elaborate, they show a very similar fluidity in the treatment of anatomy. They also share the strong 'contrapposto' in the raised left knee and leftward turn of the head, which seem to derive from Donatello's lost stone figure of "Dovizia" made for the Mercato Vecchio in Florence c.1430. With its raised right arm, WB.65 may perhaps be regarded as a looser derivation from the "Dovizia" but, with the fluid grace of the figure with her flowing hair, owing something also to other prototypes such as Botticelli's "Venus".

WB.65 relates even more closely to a small group of figures of children playing with animals, in which the white glaze of the figure is contrasted with the polychromy of the animal. Perhaps the best parallel within this group is with a spirited fountain figure of a boy on a dolphin attributed by Marquand to Andrea but recognised by Gentilini as the work of Giovanni. The two dolphins are painted using the same range of pigments and are so close in conception that they seem very likely to be products of the same workshop, as is another figure of a boy on a dolphin, this time entirely in white glaze, in Dresden. The attractive, if slightly vacuous, face of Fortuna is characteristic of Giovanni's style, as seen for example in the "Dovizia" and "Judith" figures or in an earlier work such as the "Last Judgement" altarpiece of 1501 in Volterra, in which the eyes are painted with a single blob of pigment, as in WB.65. The "Boy on a Dolphin" was dated by Gentilini to c.1520. This may be a little late for WB.65, especially as Giovanni seems to have used extensive white glze mainly during the first decade or so of the 16th-century, at a time when he was still working alongside his father, Andrea.

In 1994 Rosemarie Franz published WB.65 in the context of a second, slightly smaller version of the figure in the Liebighaus in Frankfurt, which has always been attributed to various members of the Vest family of potters, active in the early 17th-century in Kreussen. Starting from the assumption that the Frankfurt figure must be the original model, she criticized aspects of WB.65, notably what she regarded as the excessive use of white glaze and the harsh colour juxtapositions within the dolphin. Commenting that WB.65 was generally more "beautiful" and "exact", and assuming that it must derive from the Frankfurt figure, she concluded that it was probably a 19th-century forgery, made in Nuremberg or Vienna. The existence of 19th-century restorations recorded during the conservation of WB.65 would seem to make this unlikely. Judging from photographs, it seems in our view more probable that the figure in Frankfurt, smaller and a little more clumsy - and as such redolent of the early 17th-century "Dürer Revival" approach towards Renaissance models - is in fact copied from WB.65, which may therefore have been present in a German collection from a fairly early date. Maraike Bückling of the Liebghaus has questioned whether the Frankfurt figure is in fact a work of the Vest family at all, commenting that in her view it has more Baroque proportions. Working from photographs, she has accepted the primacy of WB.65 over the Frankfurt version.

Practically unknown, WB.65 deserves more attention as one of the largest and most impressive independent sculpted figures from Giovanni Della Robbia's workshop.'