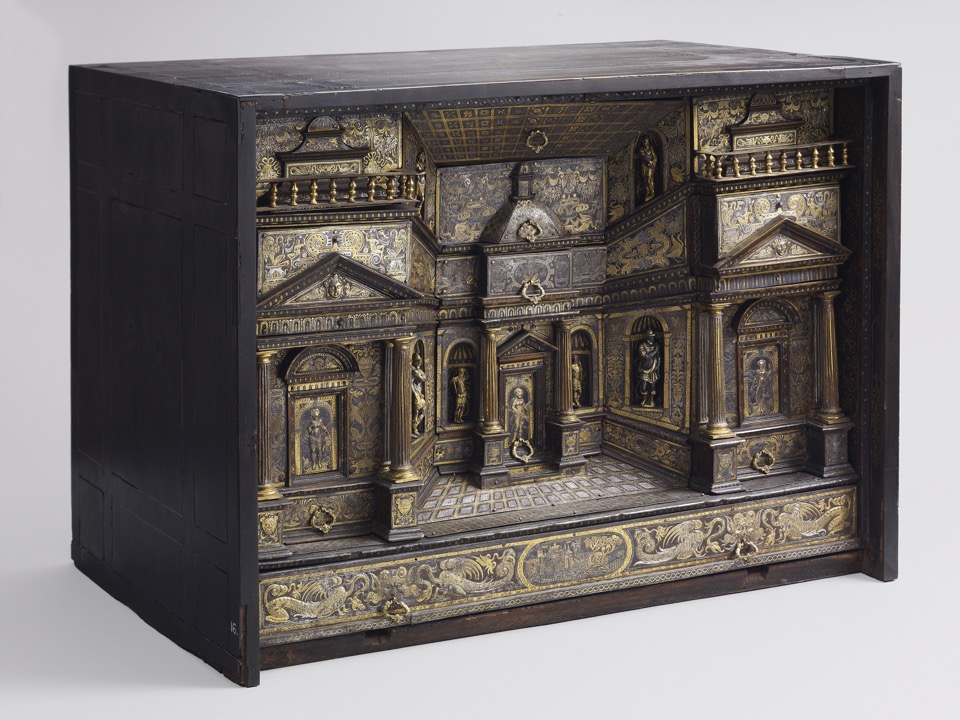 This theatrical cabinet takes the form of a stage set. Set within its architecture are drawers and miniature statues. Damascening was a speciality of Milanese armourers. Cabinets like this were important display pieces for collectors in Paris and London around 1850–1900. This one was a focal point in the New Smoking Room at Waddesdon Manor.

Cabinet with eleven drawers, consisting of oblong case of black wood, panelled; open in front, which has a hinged cover; fronts of drawers, which are set back, are formed to represent a classical façade shown in perspective; main entrance standing back and flanked by two wings; each of latter has in relief a figure in a niche between fluted columns supporting a pediment, above is a gallery; on inner side of each wing are two niches, one above the other, containing figure in full relief; main entrance surmounted by dome and with recess with figure in the round on each side; whole of front of drawers covered with plates of iron, damascened with gold and silver, and chased.

Commentary: The outer box may not be original and appears to be missing a front cover. There are a number of secret drawers inside the cabinet once the other drawers have been pulled out. Comparisons are the cabinet shown in G.Lavezzari's 1870 watercolour of Basilevsky's gallery in Paris (now in the Hermitage inv. no. 14230, cabinet possibly also in the Hermitage?). The Basilevsky cabinet was acquired at the Debruge Dumenil sale in 1850. Another comparison is in the Louvre, inv. no. 6253.