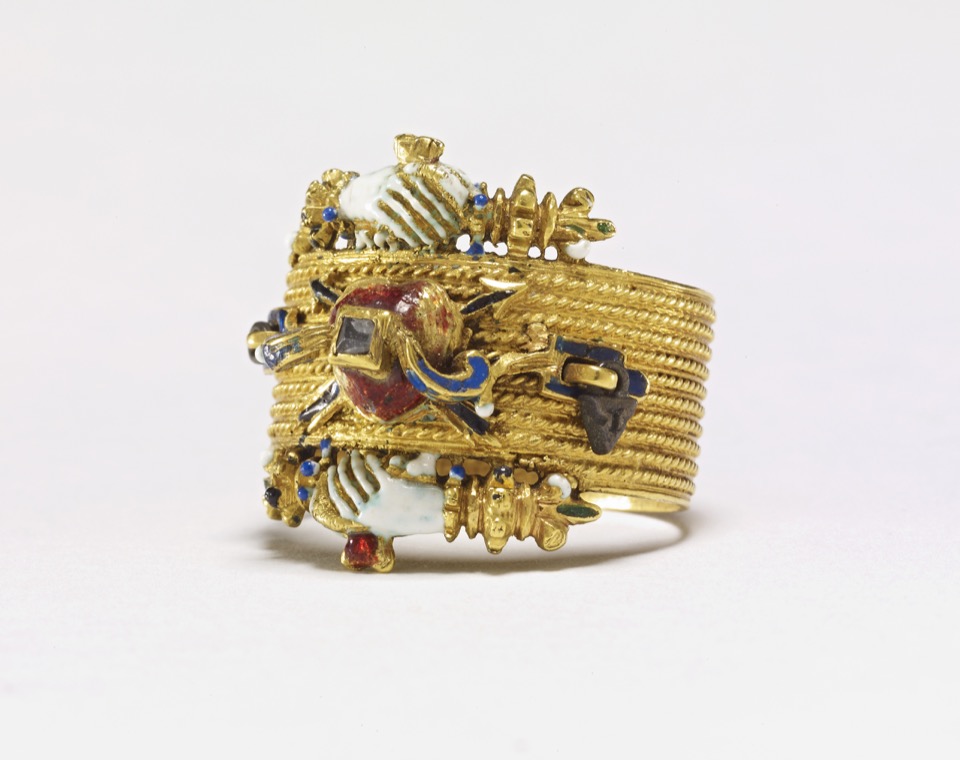 Fede-ring; gold; enamelled; broad band covered by alternating twisted and plain wires; two pairs of white hands clasped over red heart project from each edge, between them is crystal set in heart over crossed arrows and fixed with padlock.

Commentary: In almost every respect this finger-ring seems to be an exception. The seventeenth-century Flemish origin proposed in Read 1902, Dalton 1912 and 1927 and Gere 1981 seems untenable.

The fede- (or hand-in-hand) ring is said to derive from the Italian ‘mani in fede’ (‘hands in faith’) but it was not uncommon in Roman times, when the two clasped hands, DEXTRARUM JUNCTIO, represented a contract. The Roman symbolism of two hands clasped in troth was, of course, highly applicable to the Christian betrothal- or marriage-ring. During the Late Middle Ages such rings were not unusual and were probably given by the future bridegroom to his betrothed during the betrothal ceremony which at that time took place at the church door. Sometimes rings would be exchanged, and during the actual marriage ceremony it was usual to have the ring blessed and then placed on the right hand of the bride - not on the left hand as in the more recent practice. An excellent fifteenth-century example of an English silver fede-ring of this type is preserved in the British Museum (Dalton 1912, no. 1113); it is inscribed on the exterior of the hoop GOD HELP and has in high relief two four-petalled flowers issuing from the heart that is placed on the side of the hoop opposite the bezel. The bezel itself is formed by the two clasped hands, and the wrists are covered with naturalistically depicted buttoned sleeves. Throughout the sixteenth and seventeenth centuries the fede-ring developed and many variants have survived (see Dalton 1912, nos 1002-80; Oman 1974, pp. 38, 109; idem, ‘Catalogue of Rings in the Victoria and Albert Museum’, London, 1930, pp. 21-2).

The recorded fede-rings, of the Renaissance and the seventeenth century do not compare with this finger-ring, although the general appearance of its enamelled central element (the pierced heart) and of its flanking elements (the clasped hands) is in the Late Renaissance style. The following points should be observed:

(i) The use of a broad band for a fede-ring is exceptional.

(ii) The broad band is not, in fact, made of multiple wires, alternately twisted and plain, although the exterior surface is made to give that impression.

(iii) The two pairs of clasped hands appear to have been identically formed, from the same mould or stamp, and to have been joined on to the edges of the broad band in a secondary stage of production, leaving tiny gaps where the design causes the surfaces not to meet.

(iv) The rough, virtually unfinished quality of the loose ends of the gold loops which terminate inside the hoop are unparalleled instances of crude workmanship on a gold enamelled and gem-set finger-ring of the Renaissance. Furthermore, because these rough ends would drag against the flesh of the finger making any regular attempt to wear it most unlikely, it must be conjectured that it was intended for some special ceremonial occasion, after which it was carefully preserved for posterity.

(v) As both gold loops (with their attached padlock and ring) are not integral with the finger-ring, it might be argued that they had been added at a later date, but the two holes are clearly original and an integral part of the design of the rectangular frame on either side of the central motif. As the two holes were intended ab initio and there is no sign of damage, it seems unnecessary to postulate a change of the type of loops.

(vi) The use of a tiny silver padlock and miniature silver ring, both of which freely swing about as the ring itself is moved, would be most exceptional features on a finger-ring of the Renaissance. They are, however, essential elements in the design, for they alone indicate that the pierced heart (in the centre) is held in fetters securely fastened to the two rectangular frames.

Because the broad band gives the impression of a peasant ring, especially the kind that was popular in the remoter parts of Scandinavia and Eastern Europe, there is a possibility that it was made within the same tradition that produced the eight pairs of enamelled gold clasps on the ‘dolmán’ which the Palatine Miklós Esterházy (1582-1645) wore at his wedding in 1611 (preserved in the Museum of Applied Arts, Budapest; formerly in the collection of the Esterházy Treasury, Inv. no. 52.2377) or the enamelled betrothal pendant, one of six that were made either in 1626 for that particularly magnificent wedding held in Kassa when the ruling Prince of Transylvania, Gábor Bethlen, married Katherine of Brandenburg or, more probably, in 1625 for the betrothal ceremony that had taken place by proxy in Berlin (also preserved in the Museum of Applied Arts, Budapest, Inv. no. 54.4738). Both these historic items have been published by Hejj-Detari 1965, pp. 47-8, figs 44 and 46.

The Esterházy dolman is a satin and lace tunic with the eight clasps each designed as a pair of white-enamelled hands holding a heart that divides in two when the tunic is opened; white enamel doves next to the wrists of the hands fly up from hearts containing flowers of red enamel and leaves of blue enamel (see J. Höllrigl, Magyar viselettörténeti kiállitás, in the ‘Catalogue of the History of Hungarian Costume’, Budapest, 1938, p. 15). Despite the importance of the occasion, the clasps have a naïve, almost peasant-like quality and are of documentary significance in the history of Transylvanian enamelling. Two gold enamelled betrothal or fede-pendants from the Esterházy Treasury may be of the same date (Museum of Applied Arts, Budapest, Inv. nos E. j. 252 and 253) but both have lost the precious stones out of their settings and some of the enamelled doves. Nevertheless, their original design is preserved, and in each the most prominent and conspicuous feature is the pair of white hands holding a heart set with a jewel and sprouting a forget-me-not flower (see Hejj-Detari 1965, p. 65, fig. 45). Another damaged example, also missing its precious stones, is preserved in Walters Art Gallery, Baltimore (see Diana Scarisbrick in ‘Jewellery - Ancient to Modern’, Baltimore, 1979, no. 537; see also no. 535 for a description of the so-called Esterházy Marriage Necklace, which in part appears to be a later fabrication based on these early seventeenth-century damaged pendants, though the 1979 catalogue continues to attribute this almost undamaged necklace to the “early 17th century”). Yet another pendant of the same design, though slightly larger and set with diamonds, is now in the Rijksmuseum, Amsterdam (see E. G. G. Bos, A Renaissance Pendant with Marriage Symbols, ‘Bulletin of the Rijksmuseum’, 1966, pp. 65-70.) Again, the prominent and central element is the pair of white-enamelled hands holding an enamelled heart set with a table-cut precious stone.

However, the 1625-6 betrothal pendant of Gábor Bethlen is a far more splendid version, for the large heart in the centre is enamelled in translucent red and is set with one large and four small diamonds, while the frame set with emeralds and diamonds incorporates not only white doves, a death's skull and anchor but also a green serpent at which an arrow is aimed from either side. This is the only fully documented Hungarian jewel of the Late Renaissance that appears to combine both arrows and a heart, but the arrows are not piercing the heart, nor are they crossed diagonally, as on the finger-ring.

In the Victoria and Albert Museum (M.461-1936) there is a particularly fine Hungarian circular jewel (diam. 2.5 in, 6.4 cm) of enamelled gold lavishly set with rubies and diamonds; in the centre a ruby heart beneath a diamond-set crown is pierced by two diamond-set arrows, crossed and arranged diagonally. This Late Renaissance jewel, illustrated in colour (front and back) in A. Somers Cocks, ‘An Introduction to Courtly Jewellery’, 1980, p. 33, pls 30-1, dates from the first half of the seventeenth century, perhaps as early as the 1620s, and was presented to the Victoria and Albert Museum in 1936, along with fourteen other pieces of Hungarian jewellery of seventeenth- to nineteenth-century date, by the Countess Harley Teleki. The Teleki family was prominent among the more distinguished of the Hungarian nobility, and in the nineteenth century many of their historic treasures became well known and even published (for example, in Emerich von Szalay, ‘Die Historischen Denkmäler Ungarns: Der Millenniums Austellung 1896’, Tafel LXXVII.) For this reason it is perhaps significant that when the Countess Teleki presented this jewel in 1936 its history was recorded in the Museum's archives as “said to have belonged to Francis Rakoczy, Prince of Transylvania”. If this tradition is correct, then it seems unlikely that he was the first owner of the jewel, because Francis Rakoczi I did not succeed his father as Prince of Transylvania until 1660. When he died in 1676, he left two children, Francis and Julianna. Having been given a pro-Hapsburg education in Vienna and married Princess Charlotte Amalie of Hessen, Francis Rakoczi II only returned to his estates in Hungary in 1694. After leading the kuruc forces and other rebels for some seven years against the Austrian oppressors in a campaign culminating in the convening of the Diet (national assembly) at Patak in 1708, he was finally driven into exile in 1710 by the Imperialist forces. It seems likely, therefore, that the Teleki family tradition may be incapable of proof but that the making of this jewel pre-dates the rule of Francis Rakoczi I by some thirty years at least. However, it is indisputably a jewel of very high quality and may have passed by inheritance to Francis Rakoczi II, the hero of the fight for freedom. Indeed, it may have originally belonged to the first member of the Rakoczi family to be elected Prince of Transylvania, George Rakoczi I, who was elected in 1630 and died in 1648.

Both the workmanship and the style of this so-called Rakoczi jewel confirm its traditional Hungarian attribution, and it is especially relevant that the device of the heart pierced by crossed arrows should have been used, albeit under a crown. It provides further support for associating this fede finger-ring with the story of Transylvanian jewellery, either in the Renaissance or in the Revivalist period. Since the Esterházy and Gábor Bethlen jewellery from the first quarter of the seventeenth century has in the past excited a great deal of interest, and has led to the so-called Esterházy necklace being made up in the nineteenth century, it is important to look equally critically at this fede-ring and consider its puzzling features within the context of this Hungarian or Transylvanian tradition that goes back to the Late Renaissance.