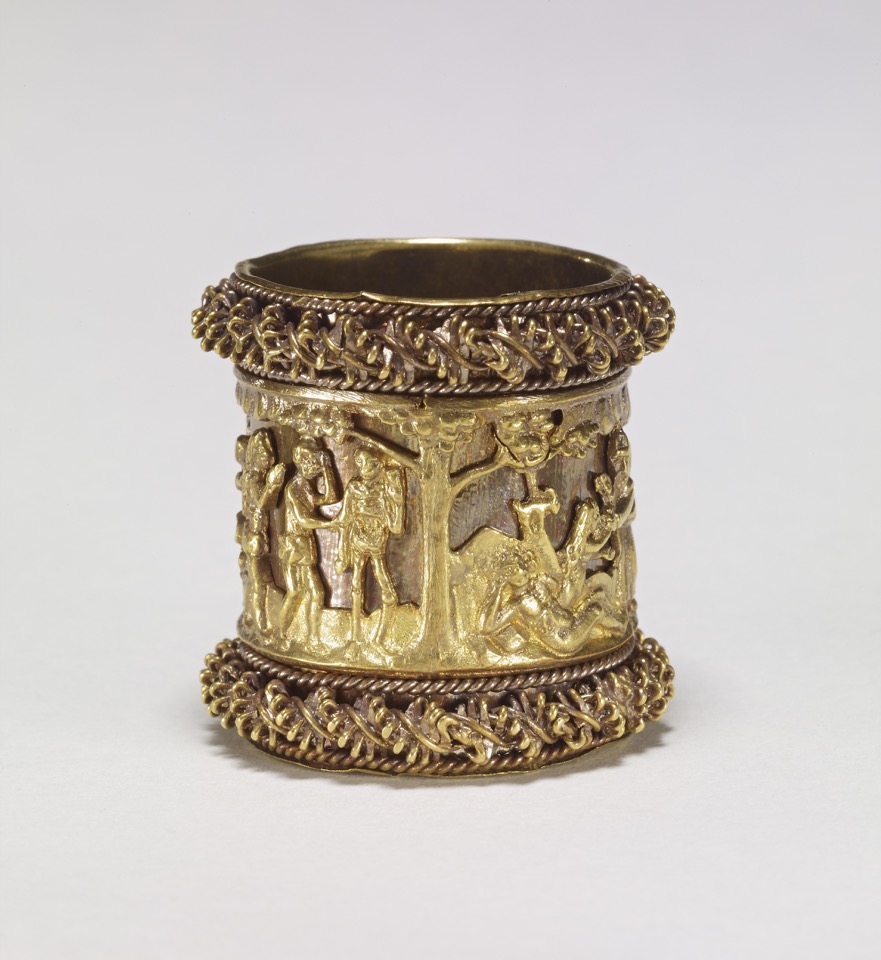 Decorated with reliefs showing the creation of Eve, the Fall and the expulsion from the garden of Eden, with the Hebrew inscription ‘Good luck’ (mazal tov) engraved in the hoop.

Marriage-ring; gold; hoop a broad band with borders of looped and twisted wire; sides covered with pierced plate with the Creation of Eve, the Fall and the Expulsion from Eden; engraved inscription on interior.

Commentary: These large Jewish marriage-rings are said not to have been intended for wear but only for use at the ceremony, when they were placed on the middle finger of the bride's right hand, but curiously the subject is poorly documented and it is not known when these Adam and Eve rings were first introduced in this way. As a Jewish marriage did not have to be solemnised in a synagogue but often took place under a canopy in the open air, in a private house or garden, it is generally assumed that these elaborate marriage-rings were not made for the synagogues but for private individuals; however, because of their special traditional function, these elaborate rings had to conform in their basic design to one of the few approved types and consequently their appearance probably remained little changed over a long period. As a result, these rings can rarely be dated on grounds of style, but some indication of date may be deduced from the various techniques employed in their making.

It is important to note that a very similar finger-ring, which was in the Octavius Morgan Collection in the mid-

nineteenth century and is now preserved in the British Museum (see Dalton 1912, no. 1331 [AF.1411]), has the identical set of three scenes executed in the same technique but enriched with enamel (white, translucent green and blue). The pierced gold plate with the three scenes in relief is produced by some mechanical process, either by casting or stamping. Only in the application of enamel on the Octavius Morgan example is there any technical difference between the two rings, whilst its more modest borders give it a more squat appearance.

The previous attribution of the Waddesdon example to the sixteenth century was perhaps based on the style and iconography of the figural scenes, although they cannot be said to offer a firm basis for dating. However, the existence of an almost identical marriage-ring in the Guilhou Collection (sold at Sotheby's, 12 November 1937, lot 668a, pl. XXIII) is significant because instead of the pierced plate of figural scenes in the central zone it has an applied band of running floral sprays enamelled in blue, white and green on a gold ground. The style of the floral spray seems unlikely before the mid-seventeenth century. Significantly, the motif of the tulip, which figures prominently among the sprays, became widely popular in Europe only in the 1630s, although the plant had been introduced from the Levant many years before. Because the Waddesdon Garden of Eden marriage-ring and the Guilhou example are identically constructed, with precisely the same distinctive twisted wire-work in the two narrow bands, both these marriage-rings may have been made in the same workshop.

Equally similar, both in construction and in style, are two more gold Jewish marriage-rings in the British Museum (Dalton 1912, nos 1333 [WB.1412] and 1334 [WB.1413]); both have figural scenes pierced in an applied plate around the cylindrical hoop. The former has enamelled figures connected with Jewish ceremonial rather than biblical scenes: there are two figures bearing offerings of the first fruits, a third lighting the golden candlestick, a fourth blowing the ram's horn, and a priest with the Tables of the Law.

On the other ring the Fall is depicted with the beasts of the Garden of Eden occupying the rest of the space around the hoop. The great similarities between these two rings and those with the triple sequence of scenes from Genesis (the creation of Eve, the Fall and the Expulsion) indicate that they may all have a common origin, perhaps in Eastern Europe.

Nevertheless, the indisputable use of a mould or stamp to create identical sets of scenes is an unexpected feature of these Garden of Eden marriage-rings, and scarcely in accordance with the practice of Italian Renaissance jewellery. The technique of applying a pierced band of decoration around the cylindrical hoop of the finger-ring is so exceptional that neither the Venetian nor the German Renaissance attribution of former writers seems convincing, whereas a slightly more recent origin in some Eastern European centre, such as Hungary or Transylvania, may be indicated. A dated ornamental silver-gilt finger-ring of similar shape, inscribed with the initials M.T. (for ‘mazal tov’) on the inside of the hoop, is preserved in the Jewish Museum, London; the Hebrew inscription for 6474 ( = AD 1614), also on the inside, has been recently studied and is published as authentic in Gertrud Seidmann, Jewish marriage rings, ‘Jewellery Studies’, I, Society of Jewellery Historians, London, 1983-4, pp. 41-4, fig. 5, although it is pointed out elsewhere (p. 42) that because the engraved inscriptions on the interior of the hoops are not integral with the manufacture of the ring, there can be no certainty as to when the engraving was executed.

For a discussion of other aspects of the history of Jewish marriage-rings see WB.195.