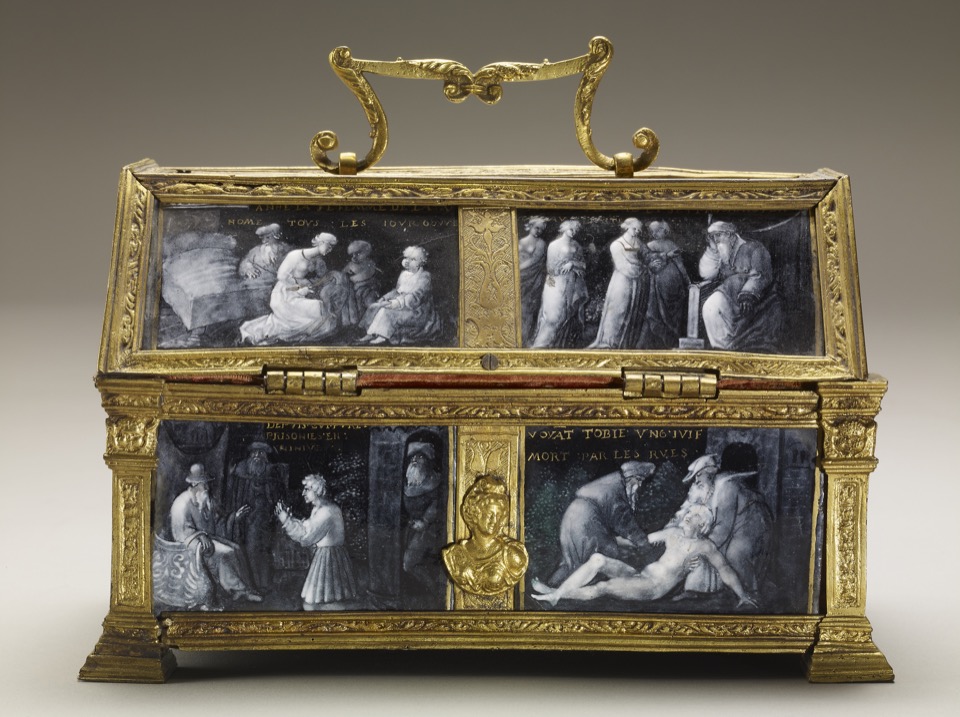 Casket, the story of Tobit

The biblical book of Tobit tells the story of an Israelite living as an exile in Nineveh under Assyrian rule. He remained faithful to Judaism. Scenes from his life on the panels are accompanied by French inscriptions. The enameller is unknown, but the casket is painted in layers of white on a dark ground (grisaille) with great subtlety and fluency.

Painted Limoges enamel casket made of twelve plaques; mounted in a gilt metal frame; story of Tobit from the Apocrypha; inscribed; on back of casket, two plaques on the sloping lid and two on the main body; painted in grisaille on a black ground with thin washes of green on the background details; legends and details in gilding; counter enamel uncertain - hidden.

Commentary from Tait 1981: '[The casket has] skilfully painted miniatures in grisaille and explanatory inscriptions in French painted in gold, [and] is composed of twelve small plaques depicting the story of Tobit, but none is signed. This gifted enameller may have been a member of the Pénicaud workshop and can perhaps be identified with an anonymous enameller who occasionally signed his works, M.P. Whatever may be his correct identity, this enameller's subtle delicacy of the gradations of tone shows a complete mastery of the technique of grisaille enamelling and this casket probably dates from the 1540s.'

For a similar casket in Lisbon see: 'Guide to Dr. Anastacio Gonçalves Casa-Museo', p. 24, fig 1. A casket with an identical mount is in the Hermitage, (inv. no. Ф 279, previously Б -314).very similar mounts also on casket in Turin, Armeria Reale, which has same woman's bust on side panel and same handle and profile, and another with similar mounts in the Art Institute of Chicago (inv. no. 1937.821).