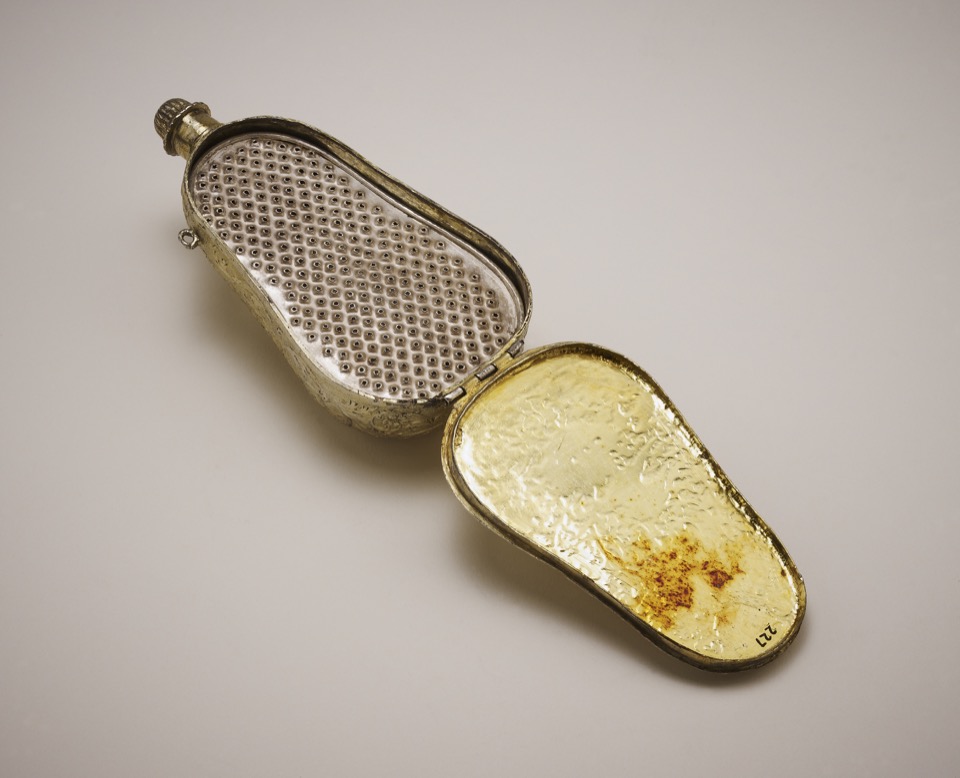 On a smaller - and, therefore, more comparable - scale, the silver-gilt covers of a rectangular notebook (containing two thin ivory 'pages') are identically decorated in this strikingly asymmetrical but lively and elegant fashion. Again, there is only a narrow, plain border on all four sides and the background - as with the armorial dish and the coffee-urn - is matted to contrast with the so-called 'acanthus' foliate scrolls in relief. This notebook (L. 7.7 cm) is part of a travelling-set of silver by the Augsburg goldsmith Daniel Priester (master about 1665, died in 1702) and is preserved in its old leather case (Museum für Kunst und Gewerbe, Hamburg, inv. no. 1928, 15a-I; see Renate Scholz, ‘Goldschmiedearbeiten, Renaissance und Barock’, Hamburg, 1974, pp. 92-3, cat. no. 30, illus. on p. 56, where it is described as “Augsburg, um 1700”; see also Seling 1980, I-II, p. 289, fig. 527 (where it is dated “um 1698”) and III, p. 221, no. 1664(c)).

Soon after 1700, the introduction of ‘Laub- und Bandelwerk’ into the repertoire of ornamental design changed the character of this foliate scroll decoration, giving it a far more formal and disciplined effect - as can be seen on the splendid 'mass garniture' (two silver-gilt covered cruets on an oval stand set with painted enamel medallions) in the Cathedral Treasury at Osnabrück (see Borchers, ‘Goldschmiedearbeiten’, Osnabrück, 1966, pp. 85-7; also Seling 1980, p. 305, fig. 666, where it is dated “1705-1710”). On the stand, the similar scrolls of so-called acanthus ornament in relief against a matt ground are combined with the basket-of-fruit motif but also with the stiff, but relatively unobtrusive, ‘Laub- und Bandelwerk’ that was quickly to become so popular. This wine and water credence set in Osnabrück Cathedral was made by the Augsburg goldsmith Johann Philipp I Schuch (master about 1687, died in 1733).

Consequently, in the absence of any marks on this rasp - and rarely are such small items marked by German goldsmiths - the attribution of this unusual object must depend on its similarity to the decoration found on larger items bearing reliable marks or, exceptionally, on some comparably small piece from a set that can be dated precisely because of its association with the marked larger pieces in the set, as in the case of Daniel Priester's travelling set in Hamburg. Elsewhere in Europe, however, this style had been adopted by late seventeenth-century goldsmiths but rarely found expression in this highly individual form, with its spacious, elegant and slightly asymmetrical arrangement of the relief against the matted ground. For example, the Amsterdam ‘parelmoergraveur’ Jan Belkien, who signed the Sloane Collection nautilus shell, has used the same form of decoration in a very accomplished, and perhaps typical, Dutch manner that has resulted in a more dense and more symmetrical effect (see WB.116). Some of the elements of this mode of decoration (including the birds) can be seen in a more tight form among the engraved designs of artists, like the French Huguenot immigré Simon Gribelin (arrived in England about 1680), especially in his ‘New Book of Ornaments Useful to all Artists’ (London, 1704), and in the set of prints by a Dutch artist, C. de Moelder, entitled ‘Proper Ornaments to be engraved on plate’ (London, 1694), one of which shows not only the panels of ornament but also a small, circular box and two capped canisters (see Hugh Tait (ed. and contrib.), ‘The Art of the Jeweller, A Catalogue of the Hull Grundy Gift to the British Museum: Jewellery, Engraved Gems and Goldsmiths’ Work’, London, 1984, I, p. 80, no. 414, II, pl. 115, fig. 26). Tentatively, therefore, the Waddesdon Bequest rasp, with its typical, strong and very conspicuous hinge, may be assigned to a leading workshop shortly before 1700, most probably located in Augsburg.

Such an attribution, if correct, would confer on this object a position of special significance, for within the history of the European social custom of taking snuff this snuff-grater would seem to be one of the earliest to have survived. According to Edmond Baillard, in his ‘Discours du Tabac’ (Paris, 1693), the large tobacco leaves, usually picked in August, were soaked in a specially prepared syrup of tobacco juice and wine until they were fermented and had turned red; they were then rolled and twisted tightly into cords called carottes and these could then be grated on rasps to produce simple snuff or rappee (from the French râper, to grate), or it could be milled to produce the many matured types of snuff. Baillard gives a recipe for snuff and recommends the storing of it in ‘une boîte à plomb’, presumably an early reference to a lead tobacco jar. Simon Barbe, in ‘Le Parfumeur Français’ (Paris, 1693; trans, into English 1697), included an account of the many ways of preparing scented snuff; but these different snuffs, often intended for use at various periods of the day or seasons of the year, were regarded by many as highly effeminate. Indeed, many were probably taken by women, for there is ample literary and pictorial evidence to confirm that the ladies of the French Court had adopted the habit with zest by the beginning of the eighteenth century. In the seventeenth century it was still the custom to have your own rasp (‘la râpe à tabac’) and to grate your carotte as and when required; and, although there is no certainty that this example in the Waddesdon Bequest was intended for use by a lady, it does seem to be on a smaller scale than most early known specimens. The earliest type of rasp is said to have a German origin (see ‘La Râpe à Tabac’, exh. cat., Musée de l'Hôtel Sandelin, St-Omer, 1984, p. 10) and, like this example, does not include within its overall design a separate compartment for the storage of the freshly powdered snuff. However, as so few examples of this earliest type have survived, it is extremely fortunate that the decoration of the Waddesdon Bequest rasp enables it to be reliably dated towards the end of the seventeenth century.