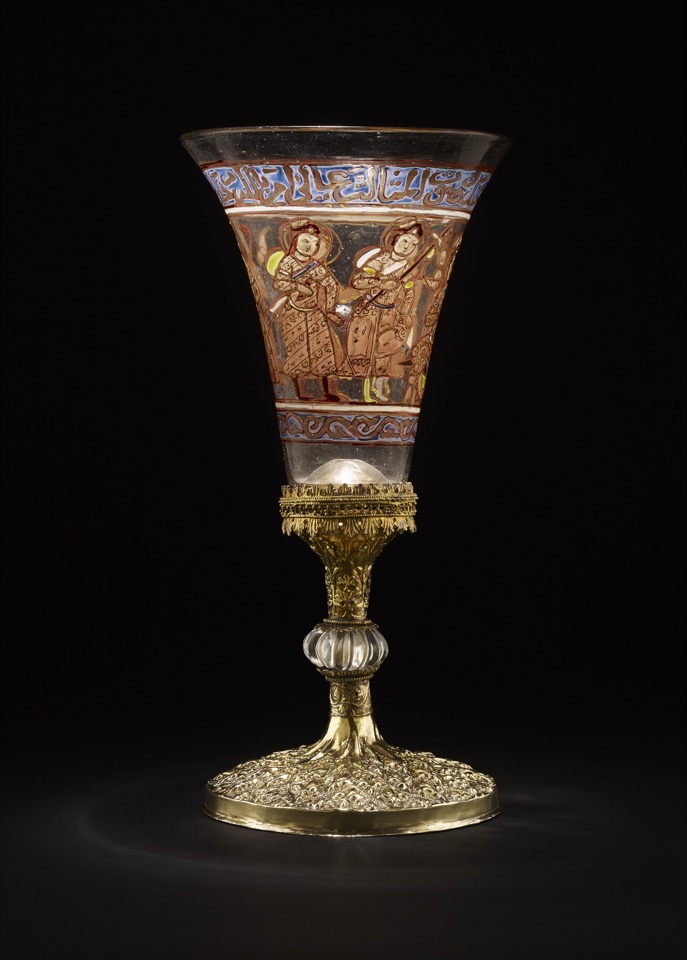 The Middle Eastern beaker was transformed into a goblet in France. One line in the Arabic inscription above the figures is in praise of wine and can be traced to the poet Kushajim (died around AD 961). Middle Eastern decorated glass had high status in medieval Europe, and was coveted by rulers and nobles. Later it was treasured in European courtly collections (Kunstkammern).

Goblet of clear glass enamelled and gilded; mounted on foot of silver gilt embossed with fleurs-de-lis; inscription in gold on blue ground near edge; below, a prince seated between two attendants holding swords, beyond are three others, one holding a polo club; figures modelled in thick white enamel, thinly gilt with details in red and blue; goblet has flat foot-rim with turn-up inside; held in mount by leaves; stem embossed with pairs of birds sitting on branches; ribbed crystal knop; base embossed with fleur-de-lis in lozenge diaper.

This object was previously owned by Palmer-Morewood, and collected and bequeathed to the British Museum by Ferdinand Anselm Rothschild.

Provenance: At some point in its history the cup entered the collection of the Palmer-Morewood family, of Ladbroke in Warwickshire, who later sold it at Christie's, London, in July 1893, for £1732-10s to 'A.W.' - probably the dealer / collector Asher Wertheimer. Its history prior to this is unknown, although in Read 1902 (see bibliography) a presumably apocryphal story is related that it had been won by an ancestor of the Palmer-Morewood family during the crusades 'from the then king of France at a game of cards'. Following the Christie's sale it entered the collection of Baron Ferdinand Rothschild, and was probably bought by Wertheimer at auction on his behalf.

Commentary: The lines of Arabic around the rim of the glass are a poem in praise of wine. One line is attributed to the poet Kushajim (d. c.961) and says 'Repent! While the cup is in the hand of the beardless youth, and the sound of the secon and third [strings of the lute] is loud!'. The most notable comparisons with the cup, particularly relating to the distinctive way that the base of the glass beaker is constructed, include the 'Cup of Charlemagne' in the Musée des Beaux-Arts, Chartres (also with a contemporary French mount). A further two, with German mounts from the early 1400s, are in the Grünes Gewölbe in Dresden (inv. nos. IV 192 & IV 193); and another, which is unmounted, is the 'Luck of Edenhall' in the V&A, (inv. no. C.1 to B-1959).