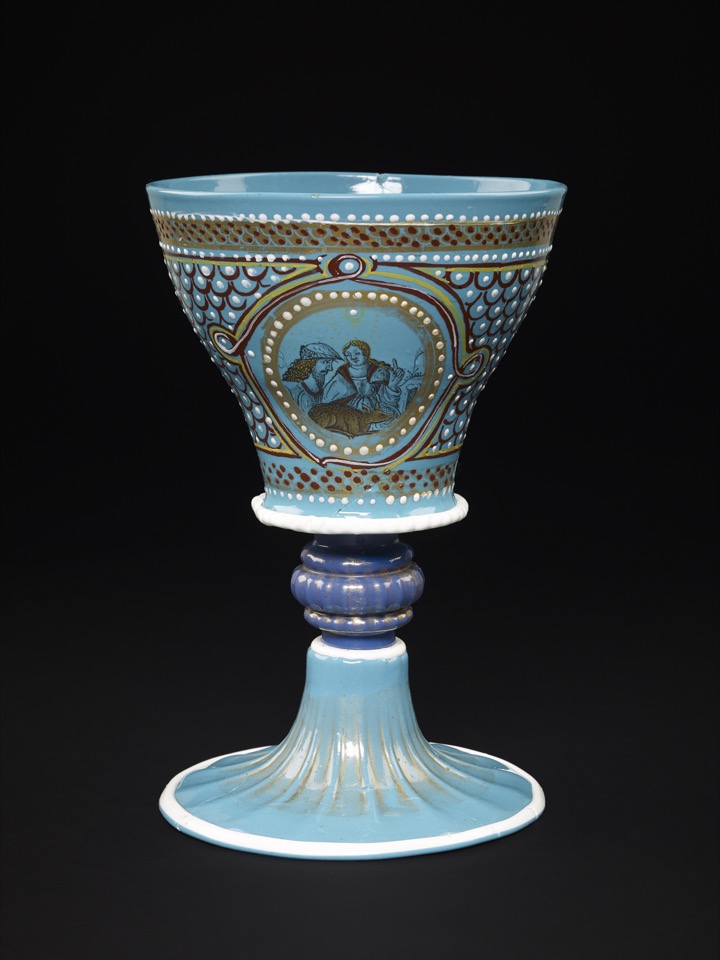 The goblet is enamelled and gilded with pairs of lovers, suggesting that it may have been a betrothal gift. The blue glass imitates the semiprecious stone turquoise. Turquoise glass was an extremely rare luxury product developed by Venetian glass makers in the 1490s. Up to a dozen skilled specialists worked together to make this goblet.

Goblet of turquoise opaque glass decorated with enamel and gilding; cup flares outwards at the rim. The body painted with scale work in dark red with white dots; on each side, within an elaborate ogival frame, is a medallion enclosing a pair of lovers, a man and a woman as if seen by day and by night. The nightime scene has a white enamel blob to suggest the moon at the top of the roundel.The daytime scene has blobs to suggest the sun's rays. At the rim and base of the cup are bands of gilding scratched through to make scales, hieghtened with blobs of enamel. Three trails of opaque white on base of cup and around the stem and foot; knop of darker blue "lapis lazuli" glass.

Commentary: From Tait 1981- '[The goblet] is made of a most curious opaque turquoise-blue glass, of which only two other late-fifteenth-century examples are known. Of the three examples, only two have enamelled figure decoration - the Fairfax Cup (in the V&A) [inv. no. C.17 to D-1959] and this goblet in the Waddesdon Bequest. As the enamelled scene of Pyramus and Thisbe on the Fairfax cup is executed in a far more clumsy and primative style, it has been suggested that the Waddesdon Bequest goblet was painted some decades after the Fairfax Cup. Certainly, the delicacy with which the pairs of lovers in the two roundels on either side of the bowl have been painted is most accomplished, and their costume suggests a date around 1500. The other curious feature about the Waddesdon goblet is that the Venetian glassmaker has achieved a solid hard-stone effect with the turquoise-blue material for, whereas the Fairfax Cup changes to a deep amethyst-red colour by transmitted light, the Waddesdon goblet remains, as intended, opaque like the semi-preciious stone it was striving to imitate. Furthermore, the maker of the Waddesdon goblet has skilfully introduced glass of two other colours: a rare lapis-lazuli blue glass for the stem and a brilliant opaque-white for the three bands. As neither the Fairfax Cup nor the other turquoise-blue glass has any such elaborations, this goblet would seem to be the chef-d'oeuvre of a leading glass-house on the island of Murano in the Venetian lagoon towards the end of the fifteenth century and to represent the sophisticated heights to which the Venetian glassmakers aspired but only rarely attained.'

The goblet is perhaps imitated from an Islamic vessel in the Treasury of San Marco. There are few archival references to this type of glass in Venice, although one reference to a dispute between Marietta Barovier and her brother Giovanni mentions four jugs in this type of glass in 1496. Andrea Mantegna had a small turquoise glass flask in his inventory, 1510, with his impresa enamelled on it: see Syson and Thornton p.195 (in bibliography) where the glass is attributed by Thornton to Giovanni Maria Obizzo, enameller of mainly lattimo glasses.