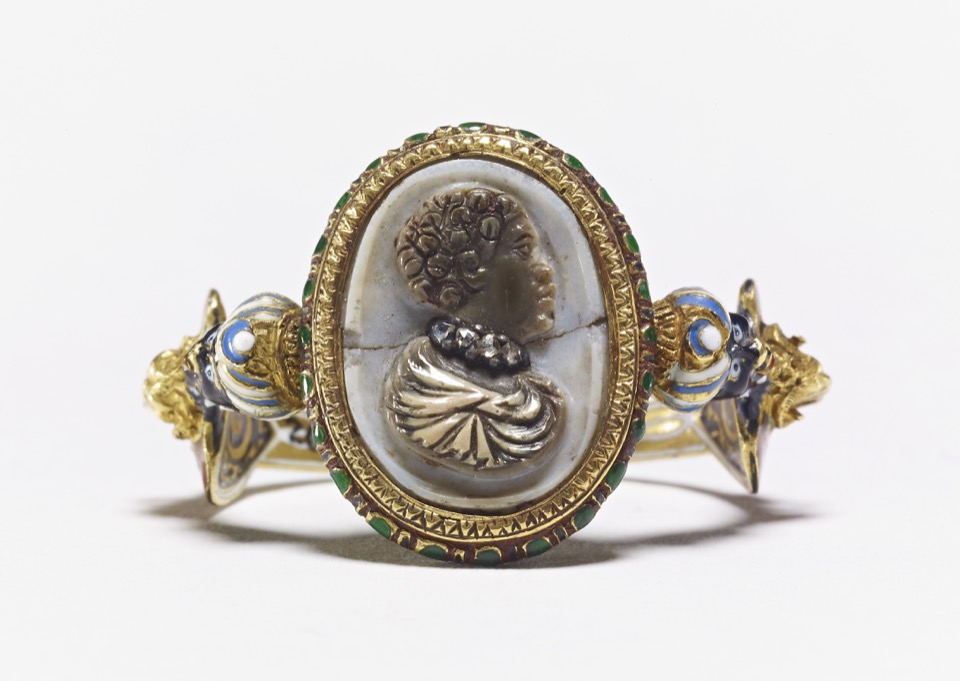 Ring with cameo of an African man

Finger-ring; gold; oval bezel set with an onyx cameo of the bust of an African with a collar of diamonds; the back has scrolls reserved upon a ground of black enamel, and in the centre a quatrefoil on a blue ground within a white circle; the shoulders represent Africans with turbans; before them are escutcheons enamelled red and blue, on each of which is a ram's head in relief and a quatrefoil; the back of the hoop is enamelled black and white; in the interior under one shoulder is a sun, under the other a moon reserved upon a blue ground, the remaining space covered by scrolls reserved on a black ground with white border.

Commentary: The traditional attribution 'German, late sixteenth century', first published in Read 1902, was repeated in Dalton 1912, where the ring appeared in reverse in the accompanying illustration. The country of origin was omitted from the catalogue entry in Dalton 1915 although the date was repeated. Indeed, Dalton grouped it with several similar cameos of African heads, which entered the British Museum's collections in 1753; unfortunately, the error about the head facing left was repeated in the text, although in that publication no illustration was included. It would seem, therefore, that a German origin for the finger-ring was favoured, but the origin of the cameo was not determined. In 1981 the most recent publication of this finger-ring states that it has a German seventeenth-century origin (see Gere in Ward et al. 1981).

An almost identical cameo but with the head facing left was included in the exhibition catalogue, ‘Further Wellington Gems and Historic Rings’ (held at S.J. Phillips, of New Bond Street, 14 June-2 July 1978) by Diana Scarisbrick (p. 17, no. 177). Although a date 'about 1600' seems to be generally accepted for this type of carving, there is little evidence to indicate where they were made.

The finger-ring setting is of no assistance in dating the cameo because it would seem to date from after the breaking of the cameo.

The disguising of the break across the neck is executed with faceted diamonds in a manner that is characteristic of the late seventeenth and, more especially, of the eighteenth centuries. The French term for such work is habillé, and it seems clear that the diamond collar would have been added soon after this tiny cameo was broken and at the same time the owner must have decided to have the finger-ring made for it. There can be no doubt that the design accommodates the cameo perfectly, and upon analysis every element in the extraordinary design is compatible with the later date - after the rose-diamond collar had been added in the eighteenth century. Neither the fanciful hoops nor the enamelled designs are characteristic of Late Renaissance or Baroque finger-rings.

Rings with African head hoops are quite exceptional, although an early design by the Italian master Carlo Ciampoli was published in 1711 in Rome (see ‘Katalog der Ornamentstich-Sammlung der Staatlichen Kunstbibliothek’, Berlin, vol. I, p. 129, pl. 92(5)). However, the combination of a ram's head, 'seraphim' wings and an Afrcan's head does seem unrecorded and probably reflects a personal whim of the owner who commissioned this brilliant tour de force.